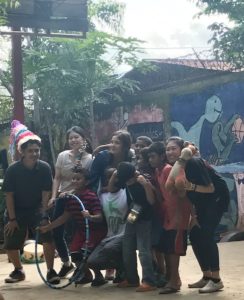 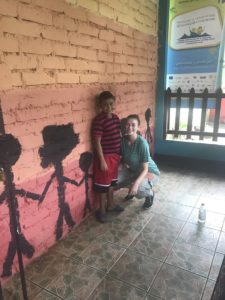 Bailey with one of the boys 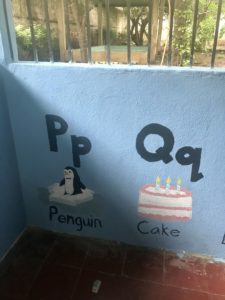 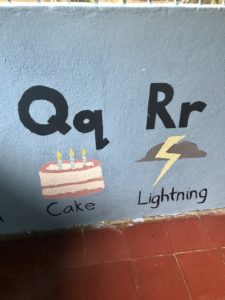 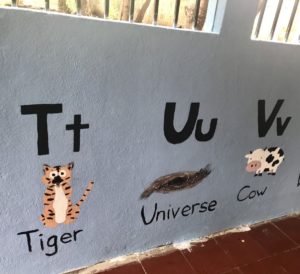 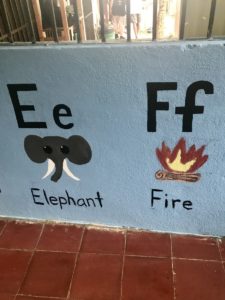 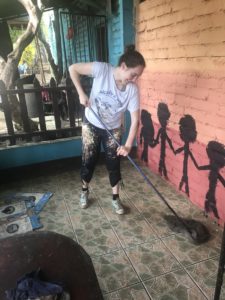 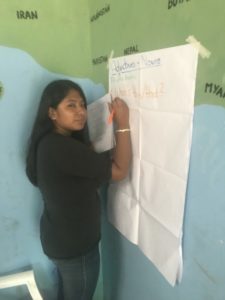 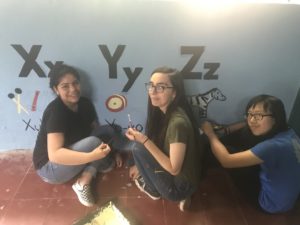 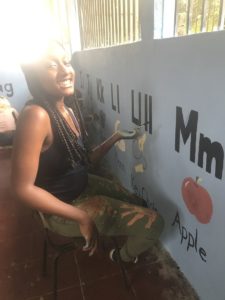 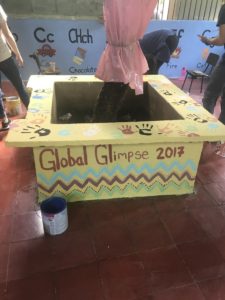 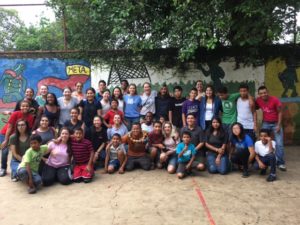 So this morning, Eddy decided to make the rest of the delegation hate us by playing the guitar for the daily wake up call at 7 AM. However, since Bryant didn’t have a pick on him, the slumbering Glimpsers were forcefully ripped from their dreams by the sound of an E minor chord being strummed over and over and over again.

Afterwards, we yearned for yummy pancakes at Imabite’s and our wish was granted. We stuffed our faces with honey all over because we were too hungry and we were not picky at this point. Pancakes or not, we were ravenously hungry.

Since group energy and morale seemed slightly low, most likely because teenagers are not built to function in the early morning, we went back to the hostel to partake in a group energizer. After quickly realizing that we lacked the rhythm to play “Big Booty”, we instead took a stab at “Down by the Banks,” which we were marginally less terrible at.

Then we headed off to Las Chavaladas for our last work day on our Community Action Project. We would learn later that some among us lacked faith and didn’t believe we’d actually finish in time. Luckily, we proved them wrong. Using our highly developed critical thinking skills, we decided the best course of action would be to split into three groups. The budget committee gallivanted off to the store for supplies while the rest of us divided to put a second coat on the comedor wall and finish the alphabet designs along the classroom walls.

Once the fun and hard work was finally over, Eduardo, Josephine, Simone, Peter and Fontanna performed a spoken word performance in front of all the children. We created an elaborate story using the toys and items we were given. We were applauded and cheered on by the kids and the rest of the Glimpsers. Afterward, we gave the kids a piñata which they proudly smashed. After the fun was over, we gave them another piñata!!!

At long last, we showed our hard work to Amalia, the program coordinator  of Las Chavaladas. She truly enjoyed us being there and thanked every Glimpser for their commitment to making the classroom and comedor more positive and conducive learning environments for the kids. We then had to say our goodbyes to the children and headed off, but not before they presented each of us with their own handmade bracelets.

Honestly, what happened after that wasn’t nearly as impactful, but there was still some significance. We went to dinner. Tutored some students in English. Had a self-reflection on how we were affected by CAP. Now, since we don’t know how else to end this, here’s one of my favorite quotes that I think is quite fitting for what the Leon 2 delegation accomplished today.

“If a hiker gets lost in the mountains, people will coordinate a search. If a train crashes, people will line up to give blood. If an earthquake levels a city, people all over the world will send emergency supplies. This is so fundamentally human that it’s found in every culture without exception. Yes, there are [those] who just don’t care, but they’re massively outnumbered by the people who do.”  ― Andy Weir, The Martian