“The purpose of life is not to be happy. It is to be useful, to be honorable, to be compassionate, to have it make some difference that you have lived and lived well.”

Today was our first day executing our CAP project, namely our Community Action Project, which was to build a movable as well as portable wall at Escuela La Amistad. Today was the day in which our motivation, our skills, and most importantly, our teamwork was put to the test. What followed was a plethora of trials and errors as well as accomplishments and perseverance. The group had come to an initial disagreement on the structure and layout of the wall, but once a consensus had been arrived at, people became as efficient as Ford’s assembly lines.

The very purpose of the project was to create a division between classrooms in order to ensure privacy and to ensure the best learning environment possible. Throughout both of our visits to Escuela La Amistad, the children have shown nothing but kindness and positive energy. Their smiles and laughter have not only touched the Good Neighbor’s hearts but has also opened our eyes to the reality that there are children who are unable to assimilate to society due to their disabilities and that schools like Escuela La Amistad that are so rare in this world. Their goal to provide students with the tools they need to become a productive citizen and to be able to provide for themselves is empowering and due to that reason itself the Good Neighbors have chosen to work hard and to do our best to further improve this amazing school.

The disagreements and the lack of teamwork was extremely present in the beginning. People began to grow bitter and more cynical about the team in their endeavor to create a sustainable community project for the school. What it took was Allison’s amazing leadership skills to reunite everyone and remind everyone again, that the project would better help the lives of a community. Lamanh’s positivity never faltered, but rather only kept growing as the needs of the group became increasingly reliant on positivity, as the group grew weary of the labor. Merlin’s knowledge of Spanish was an asset, one that was extremely vital on the trip to obtain the supplies. Angela’s extensive experience in construction had also propelled the group to success. Once Angela’s plan was placed into motion, efficiency was at its maximum. Some of the Good Neighbors would mark the dimensions of the materials, another would cut it, another would saw, and lastly another one would paint. After the end of the CAP project, few felt discontent of the results, and many have truly believed that the result was far from expectations initially. 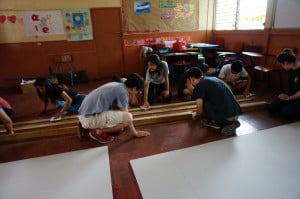 Good Neighbors working to together in order to smoothen out the roughness of newly acquired wood.

Later we would continue our annual preparation for the English class and attend the English class for another unorthodox turn of events. After the class people were ecstatic, proud, and indulged in their experience of teaching the community such an impactful language in their country as well as the world. It was with this notion, had people’s sense of community been revitalized, rejuvenated, and re-mastered into a masterpiece that us global glimpsers have no parallel to.