Today marked the third-to-last day of our trip. It began at 8 am (although most of the Glimpses woke up before), and progressed to breakfast at 8:30. Since we could sign out in groups of 4+, everyone was extremely eager to hit the streets, so we left directly from the restaurant.

My group began our free time with a trip to the plaza, where we bought souvenirs and ran into one of our PCs. Then we headed to the supermarket for snacks (there was cheese bread there that only cost me 8 córdobas). After the supermarket, we stopped in briefly on the movie theater just to check it out and then proceeded to a surf store called Get Up Stand Up, where I bought some pretty cool clothes. Then we headed back to the hostel and met up with everyone else to go to lunch at 12 pm.

After lunch, most of the groups left right away for their second chunk of free time. My group headed back to the hostel and switched up some members before going back out for some thrift-shopping. We ran into our other PC and got some directions to a thrift store before stopping in at a smoothie place on the way. After smoothies, we found some pretty cool items at the store before going to the McDonald’s next to the plaza (it was the fanciest McDonald’s I’ve ever been in, and it had some pretty stellar AC). We split a medium fry, then decided to sit in the plaza while two of our group members finished souvenir shopping.

At around 4 pm, we returned to the hostel for some down time before the nightly meeting (which had been moved up to 5:30). We got through the meeting and the passing of the torch to the new leader with enough time for a slight break before we went to dinner at 6:30 pm.

After dinner, we headed to the plaza as one group and then split off a bit to do some exploring. My friend and I headed back into the McDonald’s (for the sweet sweet AC), and ordered sodas. At 8 pm, we went back out to meet up with the rest of our group and found them playing a volleyball-like game with some kids in the plaza. The game lasted until 8:40, when we said goodbye to the kids and returned to the hostel for some down time before lights out (which leads to me writing this blog).

Although I wasn’t with everyone all day, everyone I talked to said it was a very successful and chill day overall (apart from the weather), and that they had a lot of fun shopping and hanging out with their friends. As I sit here looking back on today, the only negative thing I can think of is that this amazing trip is almost over. I had such a blast with everyone on this trip because they are all incredible humans and the worst moment of the trip is going to be saying goodbye to both them and Leon.

Thank you all for reading this blog and keeping up with the Glimpsers. We’ll see you again in two days, but until then, goodbye and goodnight. 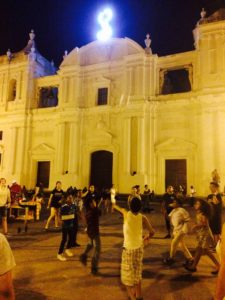