Free Day: Into Freeing Yourself 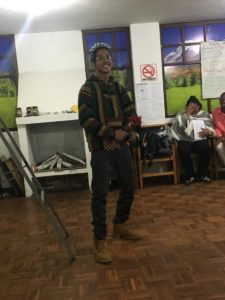 Hello my name is Danny and I was the leader for today. The day before I saw it said that I was going to be a leader of a free day, which automatically made me think it was going to be a  boring day because I wasn’t going to be able to interact and experience everything with everyone. Being that we were all able to walk around in groups and not be together as a whole the entire day like the other days.  However, I got over it and said I’m going to still try to be the best leader I can. I had to wake up at 7:00am and wake everyone else up at 7:30am. But instead I woke at 7:30 and woke everyone at 8:00am basically. From the very morning it began I started my regular funny routine as I been for the past week. I woke up everyone screaming and making a bird noise Kaaa-Kaaa . Breakfast came and of course since I am a very picky eater I only ate the eggs.  Then we had free time for like an hour and I spent it with one of the three girls that I personally feel closest to in this group. We played Uno which by the way has been the most popular game on this trip. Then I tried being the best leader I could be in the smallest amount of time being together as a group. We got to the city and everyone went their own way and did their own things. I went into a group of 5 into the city and the first thing we did was call home. It felt so warm to hear the people that raised you and love you and from everything we have seen from this trip so far with the conditions here.  We just wanted to hear their voices and appreciate them much more. Well after the phone calls were over we ate lunch and then continued experiencing the Ecuadorian city. We experienced the view, smell, and the sounds of the city. Today was mostly about exploring and doing things on your own. It was 5:00pm when we all had to meet up again being that the bus was picking us up at 5:30. We arrived at the hostel around 6:00pm and dinner was at 6:30 so I gave everyone free time to get comfortable, take a nap, or do whatever they wanted to do for those 30 min. I decided to take a nap till 6:25 then to get everyone ready for dinner. 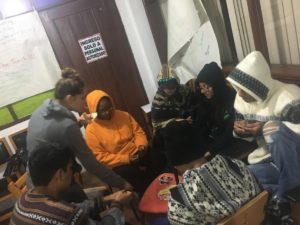 In the process of me waking up and getting everyone ready I came across one of my peers crying because her grandma had left her after she came to visit her from Peru. They hadn’t seen each other for over 15 years. From that very moment it affected the group as a whole. All of sudden the mood of the day changed. It went from having fun and laughter to a very serious and quiet moment. Then one of my other peers Brandon, who had met his family and sister for the first time in his life, returned from his day with his family. So it was also time for them to go, which affected him in a sentimental way. As soon as the group realized how sad Brandon was we all got up from the dinner table and hugged him as a group. As soon as that happened the group got very sad and slowly tears came down, one by one started to walk away and cry alone. This lead me to follow each one of them and at the same time thinking to my self “where did this come from because 40 min ago it was completely the opposite mood from what it is now?” I tried to stay strong and help as many them as I could without crying myself. I never felt so much responsibility on me in my life. Keep in mind all of this is happening with one of the shortest chances for leadership in the whole 14 days because everyone was separated in the city. I ended up spending the day with 4 of the closest girls in the group in the city to ending up spending it with a girl I never had a full conversation in the entire week that had passed so far, but always laughed at every joke I did or said. Suddenly, she was crying from the outside without telling anyone why.  In the mean time I’m crying on the inside because of this girl being my why. Even though she didn’t tell anyone why she was crying I knew it was because she was holding it inside. So I started to speak about myself so I could guide her how to start letting go of her pain. I ended up talking about stuff that I never really told anyone else. She started to burst out crying and finally started just spilling about a bunch of things she’s feeling and whats was hurting her. While time was passing and her feeling were being heard her sad frown was released from her face. I’ve never been so happy after that to be the leader in this day which I thought was the worst day to be a leader out of the whole 14 days. From this day I learned no matter the time you got, when, where, you can always make an impact in any moment in your life. So always try to make life better by doing and saying what you can every second of your life because it might mean a better second for someone else’s life. 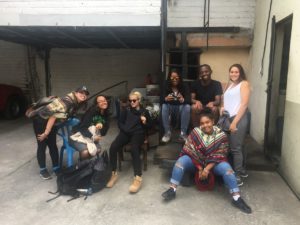