Free Day’s in the Breeze 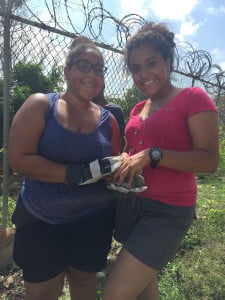 Hello my name is Stephanie, and I’m from Williamsburg Preparatory High School and I was leader of the day for “Free Day”. We all started off the day by relaxing in the ranch. Some people were in the pool, some were working on their Community Action Project (CAP) and, some discovered a cave that is by the ranch with the fellow workers at the ranch. I went to the cave by the ranch with a couple of other fellow group leaders and I was very excited because it was the second time I went to a cave and saw bats, it was a really fun experience for me. Throughout the day my challenges were having to deal with my rambunctious group.

As a leader what I learned about myself was to be more positive towards the group even if I am feeling down. Another thing I learned was that I’m a very strong leader due to the fact that I stood up for myself when I needed to. In addition, I realized I have to be more aware of my tone, because sometimes some people might take it the wrong way. I’m still learning to be more thoughtful about others feelings. The most challenging part of the day for me was dealing with the fact that some people were rowdy but at the end of the day we found ways to solve the problems we had with one another. What I did well was I always made sure everybody in the group was feeling good and everybody always had water and keeping track of time. Even though some people were being unruly I just killed them. In the future I hope to be a better communicator and to be able to both think about my responsibilities and the groups.

Someone who inspired me throughout the day was Ibrahim because throughout the day he has been helping me and making sure I have been alright and, he helped out by waking up the boys up earlier. Even though throughout the trip so far Ibrahim as always been the quiet person who was always on the side, little did we all know that no matter how quiet you are your voice we still be heard. Another thing I learned from him is that initially your voice doesn’t have to be heard literally it could be just by the actions you take and, just by that you can be a leader in your own way. Lastly I want to give a shout out to one Daniel because he was also a guest staying at the ranch he taught how to juggle three tennis balls. Also shout out to my family for letting having this experience.