Hi everyone, this is Kelly and Patricia. Today we were the leaders of the day for our Community Action Project (CAP). We had an early morning, woke up at 6 AM and had breakfast that consisted of mashed potatoes, eggs, sausage and fruits. It was also a fellow Glimpser’s birthday, Ali’s! The night before a few people decorated the dining hall with birthday signs and balloons.During breakfast, we spray silly string on Ali and gave her a birthday card where everybody signed it with birthday wishes. Then we headed down to Cuevas del Pomier at 9:00 in the morning. The group was split into two different groups where the first group worked on a traditional Taino hut and the second group worked on translating the Brochures and filming an advertisement video. 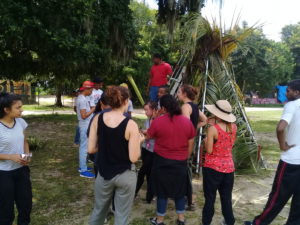 First, the hut group worked on assembling the roof of the hut with leaves attached to it. The brochure group focused on translating the Spanish words to English words. When it was noon, we all had lunch that consisted of rice, pork, beets, vegetables and plantains. After lunch, we all continued on working on our projects, whether it was the hut, the brochures or the video for Cuevas del Pomier. 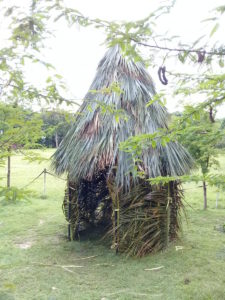 The hut group finished assembling the rest of the hut, where fellow Glimpsers, Celeste and I braided the entrance of the hut. By the time it was 3 PM, the hut group finished the assembling of the hut and we all headed back to Conamuca because there was internet issues at Cuevas del Pomier. When we got back to Conamuca, some people took showers, worked on their letters to their donors or hangout because of the free time we had. The brochure group continued working on their project until dinner time and then we had dinner at 7 PM.

And BAM!!!! Surprise party for Ali!! HAPPY BIRTHDAY ALI! We all celebrated with a delicious “bizcocho” (cake) after dinner. Later on we had our nightly meeting and passed the torch to our final leaders of the day, Renee and Paola. What a great day we had today. Overall it was an exciting day. See y’all in two days!