Today, we began delivering our Community Action Project (CAP) to the community of Barrios de las Flores. After a quick breakfast, we took a bus to the community. There, the group was split into two: one would be in charge of working with community members to break the cement while the other group would go shopping for tools. At first, we had to work without gloves which was an obstacle for most of us, especially for those who were picking up trash or the broken pieces of cement. Later, however, we were provided gloves which made the work far easier. For the most part, we had fun cheering each other on while using hammers and pick axes to break the cement. Then, we had a hearty lunch with the community members after which we went back to work. Our goal after lunch was to move the bits of broken cement to another pile for discarded materials, so the glimpsers formed a line from one end to the other and passed it down. A lot of us were mildly surprised at how heavy some of the pieces were. Later, the cement was delivered to the community and we transported the bags from the truck to the site at which it was needed to be placed. Unfortunately, thunder roared over the distant hills, signaling our retreat. Soon after arriving at the hotel, our common area flooded due to a downpour. The original plan was to walk to the school at which we would teach English Classes, but thankfully, we were able to take the bus instead. English tutoring was largely successful, and afterward, another delegation came to ask us questions as they will be taking over our classes in a few of days. By the time we were finished at the school, the rain had ceased and we walked back to the accommodations.

We learned many things today. For one thing, cement is really heavy. But more importantly, we learned the importance of teamwork. We learned that although one person cannot make a difference, they can spark a movement towards change. We understood that we needed the community and the knowledge they provided about construction. We needed a passion for our project, a need for it to be completed and to see it to the end. We learned that change is a strange thing. One person can do it, but many people are needed to make that change noticeable. I would now like to invoke the words of Mother Teresa: “I alone cannot change the world, but I can cast a stone across the waters to create many ripples.”

Although it took quite a while for us to get started on the CAP, we were proud of the way our team conducted itself without a moment’s pause. The group dynamically adapted to the different jobs it needed to perform and different parts of the group led different jobs, which was what made us so productive. We could not ask for a better delegation. Being Líder del Día was a challenging but rewarding experience. At times, it was difficult for us to agree on small aspects of leadership, such as getting people’s attention, when to give water reminders, and writing this blog. But we also had fun in our new positions and being the first to lead the CAP. At the end of the day, the Program Coordinators and other Glimpsers gave us feedback and now we both wish we had another day as Líderes del Día to improve. 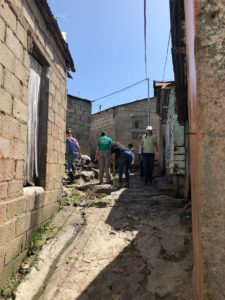 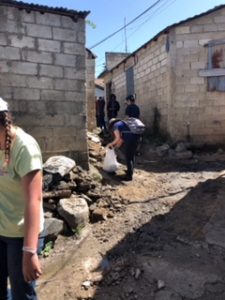