Hi friends and family, this is Jazmin Olvera and Rebeca Garcia reporting to you live from CAP Delivery Day 2. Both of us are 17 and live in Marin County. Jazmin goes to San Rafael High school and lives in San Rafael. Rebeca goes to San Marin High school and lives in Novato. Starting this blog post, Jazmin will write about our day from morning till noon and Rebeca will continue from noon to bedtime.

In the morning, we were so eager to wake up our delegation that Rebeca and I woke up an hour early. Ooops :). In the morning at 7 we woke up to a delicious breakfast of watermelon, pineapple, eggs, mangu (mashed plantains) and Orange juice. Quickly after, we headed to our rooms to go get ready for the hard work ahead of us. On the bus, we did headcount as usual and greeted our bus driver, Bryan. Kenny by accident wore her flip flops to the CAP but didn’t even notice until getting off the bus. No worries though because our PC Silvi and fellow Glimpser Meli went back to the hotel to get a different pair of shoes. 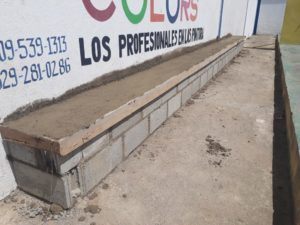 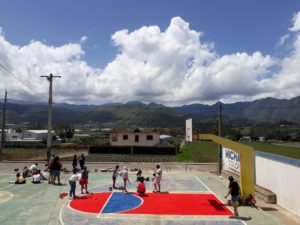 Over the course of these last few days, we leave our belongings in the community center and head down the hill with the materials needed for the day. Some people carried paint, brushes, buckets, shovels and water jugs for the whole delegation. We reached the bottom of the hill and arrived on the basketball court. It was starting to really come along.  We had used cement blocks to make the sides of the benches, filled the inside with rocks and just needed the top sitting part of the benches to be complete. At first I was on the bench team with half of the delegation. On the bench team, there were different tasks for people. One was shoveling rocks into a bucket. This was one of the hardest jobs. Another task on this team was passing the rocks to the benches. The final task was spreading out the rocks inside the benches before the tops of the bench would be put. These jobs were tiring so we decided to take a break. A member from the Constanza community had brought us coffee. This coffee was so good; it was macadamia flavored. Everyone just wanted more. 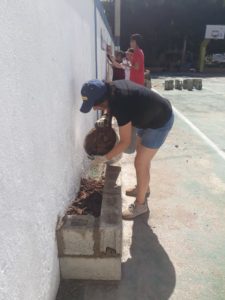 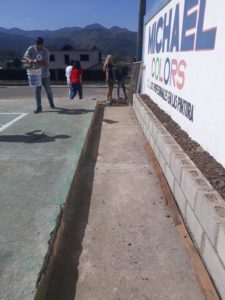 When my break was over, I had to alternate to the paint job duty.  The other half of the delegation had a paint job to do. We had swept the basketball court the day before to prepare for today’s paint job. The colors we used were blue, red, yellow and white.  Jenna and I started to paint the perimeter of the court. She gave me a tip to first paint the outline of the lines and then she would fill them in. This made it easier and more efficient. Other delegation members also started to paint the basketball court with the rest of the colors. Many children from Colonia Kennedy came, children and teens. Even two cute dogs came by, they were very fond of Rebeca as they were always close by her when painting. Throughout the rest of the CAP working period I painted and then would take small breaks in between. Today it was super hot but little did we know it would rain right after we left the site and were beginning to eat lunch. 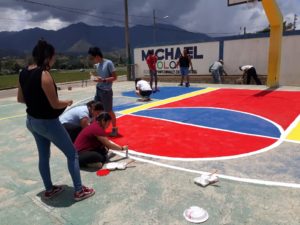 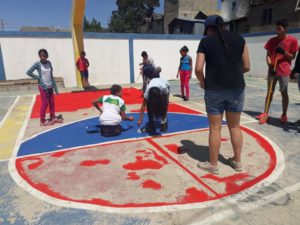 Hello Friends and families! Today was another long but rewarding day with it being the second day working on our Community Action Project. We worked with the community to repaint the basketball court and finish constructing the benches. We got far with the painting before we decided to call it quits at around one to go have lunch with the community we were working with. We again had a yummy lunch provided by Miguelito, which consisted of: assorted vegetables, white rice, beans, steak marinated in onions and fried yuca. Jazmin and I served the community and our fellow Glimpsers before we sat down to eat. At our table we were able to talk to Vladamire, who was the son of one of the workers that helped us with painting. He was 11 years old and was animatedly talking to us about his family. Our PCs Silvi and Fabi reminded us of how thoughtful it would be to mix our seating with community members, to get to know them. It was a great push to get us to introduce ourselves. Even if there was a language barrier, they were still excited and interested to talk to us. In the end, we all had great conversations and got to connect with wonderful people. 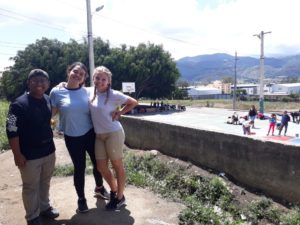 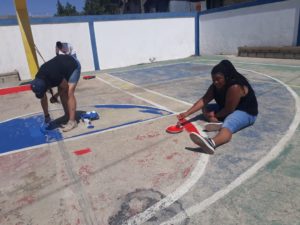 After lunch, we got on the bus and arrived at the hotel at around 2:15. We had explore time until 6:30. We all decided to take the time to shower off all the paint and dirt from working on CAP before heading out with our ambassadors. At around 2:30, we all split into small groups to be able to explore easier. Many wanted to go to the same spots, with them being the supermarket to buy snacks, the local ice cream spot, the candy store, and the souvenir shop. Everyone rotated in their small groups to hit all the spots and we were all back at the hotel at around 5:00, with Jazmin and I’s group being the last to arrive after hitting the corner market as our last stop.

At around 8:00 pm almost every night, we are able to hear a local basketball game from our hotel. We hear the cheering and hollering, and tonight just so happened to be the semi-finals. Everybody in the group had the desire to attend but we had to ask for permission, as it would create an indent in our agenda. After getting word from our PC’s that the country director would allow us to go, there was a buzz of excitement for the rest of the night. Because of the timing of the basketball game, we switched our nightly meeting before dinner. Our meeting ran quick, we are starting to wrap up our cap project so our discussion today was centered around what we learned from working on a project with a community and who we will be missing once we leave the DR. Many felt accomplished and proud with the work they have put in for the project, everyone has been working hard and putting in so much effort to create this space for the community. We also pondered about our quote of the day, which was: in every community, there is work to be done. In every nation, there are wounds to heal. In every heart there is the power to do it. -Marianne Willianson

We had dinner right after our nightly meeting, but everyone was so excited to go to the basketball game, dinner ended somewhat quickly. Everybody was ready and eager to go by 8:45. We counted off and walked buddy system style to the game. It was super exciting getting to see a live game. We ended up arriving before the main game started and got to catch the last few minutes of the pre-game. The crowd started to show up once the main teams were warming up and it got even more exciting because you felt the energy in the room. The semi finals started; all the Glimpsers were getting into it, we were all having so much fun, betting others which team would win, and cheering along with the crowd every time somebody would make a basket. They even called out Global Glimpse over the PA – they recognized we were in the building so yay! We had to leave the game early because it was getting late but everyone still had so much fun. 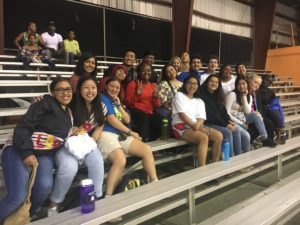 We had a long day today, but it was as rewarding as it was tiring.  We only have a couple of days left in the DR and everyone is starting to get a little home sick, but we are all still having so much fun and putting in so much energy.  So this wraps up the blog! I miss you, mom and dad! I’ll see you soon <3