CAP Day 2 and Farewell to English Students: Sad, yet Fulfilling

One of hardest tasks to accomplish as a leader is trusting your peers to continue to be productive while you’re away.

However, the Leon 1 Glimpsers could make any leader proud.

After waking up at the late hour of 6:00 AM and eating a hearty breakfast at Deja Vu (rice empanadas!), the majority of us went to La Goyena to continue our CAP Project, while Nolan and Brayan diverted to work on a new, third part of our CAP Project.

Nolan and Brayan: Still in Leon

After eating breakfast, Brayan and I went to Asociacion Viviendas Leon and met with Indiana Garcia. Asociacion Viviendas Leon is an NGO that is extremely established in each community in the larger community of La Goyena. Currently, they are not only funding and organizing a soccer league in the community, keeping youth away from bad influences such as drugs, alcohol and violence, but also heading other fantastic projects such as installing personal gardens for families, promoting a healthier lifestyle. Not only did Brayan and I facilitate the donation of 5908.50 cordobas from our group, L1A;  we also put it out on the table that we are interested in keeping an open dialogue with the organization, checking in with each other to see where the money is going, and in developing partnership with both organizations.

However, during my time creating this partnership, as the project manager for the “rock moving” phase of our CAP, I couldn’t help but worry about how my fellow Glimpsers were doing; were they ahead of schedule? Behind schedule? How was my fellow El Lider Del Dia holding up? In retrospect, there was nothing to worry about.

After our field trip to La Goyena, we split into our two teams, the “rock moving” team going to the schoolhouse to continue to move rocks, and the “mural team” going to the New Haven building to finish the domestic violence mural. As part of the rock moving team, we went to the site with our tarps and gloves and got to work. However, a few minutes later, with the help of the community leader Don Fabio, we received two shovels and one wheelbarrow, gifts from the heavens! With extra equipment, we were able to accomplish much more than we would have ever planned on.  With sporadic updates from one of the members of  the mural team, we were able to find out that they not only overcame obstacles such as the unplanned difference in the size of the wall and two windows on it, but also were ahead of schedule! The rock team would have never thought that we would even clear a full pile by the pace that we were going yesterday, but at around 10 AM we predicted we would be done with the two main piles by lunch time at noon. In celebration, we treated ourself to some water and a nap on the most comfortable concrete slab, guarded by our adopted, trusty dog Pepe.

After our short nap under a shady tree, Nolan and Brayan had made it to La Goyena! The work of the full rock team could resume at full speed, but was threatened by the most unforgiving pile of rocks, dirt, and spiders, paired with extreme exhaustion. However, as the day went on, we endured such hardships and conquered more than half of the third pile. As we were taking our final rest of the day and washing up, the mural team came to inform us that the mural was finished, and that it was time for us to place our handprints on it! Whilst walking to the mural, we were pleasantly surprised by the progress that had taken place.  We gladly put our handprints on the wall, taking a vow against domestic violence and letting the community know that they were not alone.  We got the chance to also help out the mural team by painting the hands of community members to be placed on the wall as well.

After celebrating the accomplishments of both teams, we were invited to play a “friendly” game of soccer with the community team. Expecting a group of young children, similar to what we experienced at the orphanage, we were surprised and already defeated to find out that we were to be matched up with what appeared to be a nearly professional team. Even though we were mentally and physically defeated 549-2 (Spain-vs-Netherlands-style), we pushed through and after encouraging the rest of the group to join in, and had a good time overall.

Refusal to End Our English Tutoring

After getting back to the hostel and taking a shower from the outside spigot (shower plumbing? Totally reliable.), we were reminded that our last day of English tutoring was today. We prepared for our last day with soda, chips, and sulking attitudes.   We weren’t Debbie Downers because we were still tired; to say the least, our respective English students are amazing human beings, and the last thing we wanted was to leave them. However, all good things must come to an end, but sometimes that end can be a happy one.

We asked our students yesterday to bring in snacks and drinks to share with others, ideas of games learned during tutoring that they wished to play again, and their party hats! We were pleasantly surprised to receive heartfelt grifts and demands: Never to forget them, and to contact them on Facebook (in English!). The groups participated in dance parties, gift exchanges, exciting games of “honey I love you”, and even a performance of Nolan singing. There were no “goodbyes”, but rather “see you laters”. There wasn’t a single person that wanted this experience to end.

As we ended our night with some delicious pizza and cold drinks, we reflected upon our final full day in Leon with mixed feelings. Leon has been absolutely amazing to us in these past two and a half weeks, but knowing that we will be saying our goodbyes to the breathtaking city tomorrow is a tough pill to swallow. 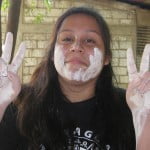 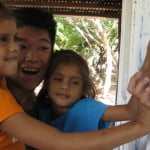 Working together, with a smile! 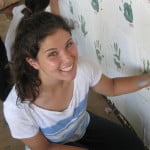 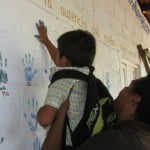 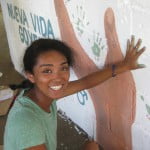 Can anybody resist that smile? 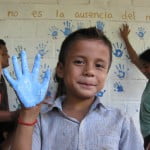 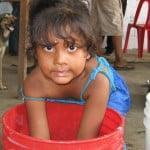 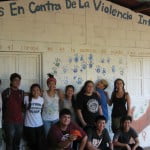 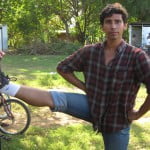 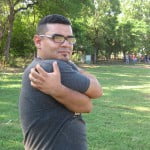 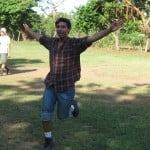 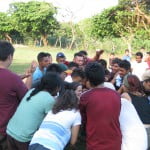