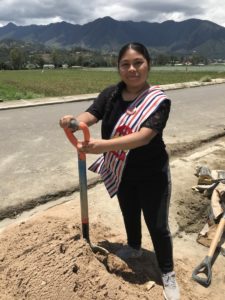 Hello, families and friends, today was our first CAP day!! My name is Sandra Montiel, I am 17 years old from Richmond CA. Today I was Leader of the Day. In the morning, I was so stressed out about being the Leader of the Day that I accidentally woke up at 6:00 am thinking that it was 7:00 (my bad) ☹. The day began with everyone waking up at 7:00 am and we had breakfast together at 8:00 am. For breakfast, we had mashed potatoes with fried cheese, pineapple, papaya, and pineapple juice. After breakfast, we had about ten minutes to get our materials ready and get on the bus to head to Colonia Kennedy and start working on our Community Action Project. 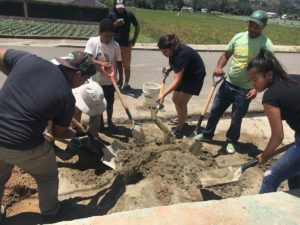 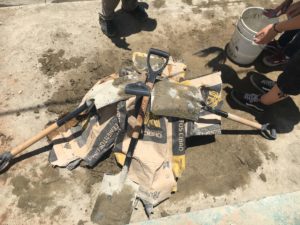 When we arrived to Colonia Kennedy, we left our backpacks in the community center and went to work on the basketball court. When we arrived to the court, all of us had different tasks to do. A couple of us were in charge of painting the walls, others had to help move the cinder blocks across the court to make cement benches while a different group built them, and a small group was in charge of sweeping the floors and cleaning the spaces where we would be repainting. I was lucky enough to be in the painting group. We didn’t expect a lot of people to show up but everyone was so committed to fixing the basketball court that they took the day off at work. Since there were a lot of people willing to help we had to divide the task evenly and switch off every now and then.

First, we started off by painting most of the walls white which was kind of hard because the walls were cracking and there was black paint on them that was really hard to cover up. While I was painting, the other groups were stacking cinder blocks on each other in order to build the benches for the audience and the players that the community requested. We also had a couple of people sweeping the floors so they could be ready to paint. There were also people making cement with community members. Every now and then we would switch off with other people and have five-minute breaks to drink LOTS of water. 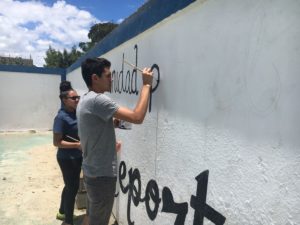 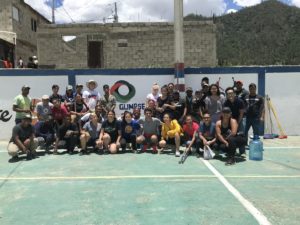 Another task I got to work on was getting cement for the bench builders and I also helped make the benches for quite a bit. After I switched off with the cleaning crew and swept all the leaves into garbage bags since we didn’t have rakes. When lunch came around, we ate with all the community members at the Community Center. We had delicious rice with chicken, salad, cucumbers, tomatoes, potatoes, and to drink, we had fresh lemonade. After lunch, we helped clean up and then said our goodbyes to the community of Colonia Kennedy. Our drive back to the hotel was really fun since everyone was singing, even our bus driver Brayan. We arrived to the hotel sooner than expected which gave everyone an extra thirty minutes to shower, nap or get ready for English tutoring. While they were doing that, I tried writing this blog. A couple of minutes before we left our GG student ambassadors arrived with a bag of shirts that they made for us that said which is our delegation name and it had Constanza in the back of the shirt. 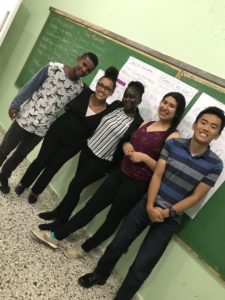 Everything was going great until it suddenly started pouring rain which seemed odd since the morning was burning hot weather. Thankfully to our Program Coordinators, we didn’t have to walk in the rain and instead they had our bus driver take us to the school for THE LAST CLASS OF ENGLISH TUTORING before graduation ☺. When we arrived to the school, we ran inside our classes so that we wouldn’t get wet. We all started our classes even though many students didn’t arrive since it was raining. I only have one student that I tutor so I expected him to not show up because of the weather, but he did, which really showed his commitment. We reviewed homework and then had a little quiz and went over previous lessons. While I was teaching him, I was feeling a little tired from our hard work in the morning but I managed to have enough energy to teach him. After tutoring, we all gather up in front of the school and got a buddy to start walking back to the hotel since it wasn’t raining anymore.

Once we arrived to our hotel we had dinner and after dinner, we had a 30-minute break before nightly meeting. For nightly meeting everyone was so kind I loved how nice and patient they were with me throughout the whole day. Once we went over our nightly meeting we passed the torch to Rebecca and Jazmin but before they became Leaders of the day they had to show their talent which was the cup song. We ended our night with a unity clap as always. Lights out was at 10:00 but everyone had to be in bed at 9:45. While everyone started getting ready to go to sleep I stayed up a bit to work on the blog. Overall the day was great even though the morning was a little bit stressful but the group managed to make my day easy, and they would help me if I had a problem. Can’t wait for tomorrow!

Question of the day: How does it feel helping others? Can one person make a difference?

This question was somewhat difficult to answer because you may what to help everyone but its kind of hard making a change in a place where they don’t want change or they are afraid of change.

Quote of the day: “I alone cannot change the world, but I can cast a stone across the water to create many ripples” – Mother Teresa