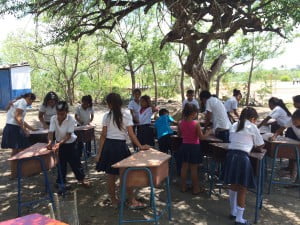 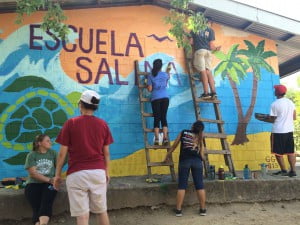 Hope everyone is doing well back home. It’s Spencer and Chris again, working together on the blog post this time. Everyone here is doing great, aside from a couple of kids suffering from slight maladies.

We finished our CAP projects today, fighting through exhaustion, the heat, and time. Some of the exhaustion stemmed from our painfully early wake-up call at 5:30, which we delivered with significantly less pizzazz than yesterday’s wake-up call was.

After breakfast, we hopped on the bus and drove over to Escuela Salinas Grande, just like we did yesterday. Once there, we unloaded and immediately got to work on our various projects. The weather was sweltering, but still, our sprits remained strong. Each group worked diligently on their assigned tasks, whether it was painting the soccer field (or as the local nicas say, futbol) or planting trees around the campus, or any of the other jobs. 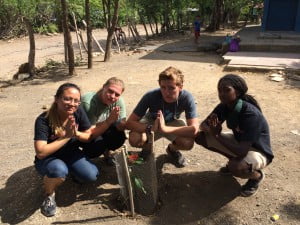 We worked from 8 to 11:45 under the unforgiving Nicaraguan sun, which made any prolonged shifts in unshaded areas impossible. At 11:45, we broke for lunch in the bus, and watched a bit of Air Force One, dubbed in Spanish of course. After lunch came piñata time. We hung a piñata up in a tree, and the school kids spilled its contents in under ten swings. 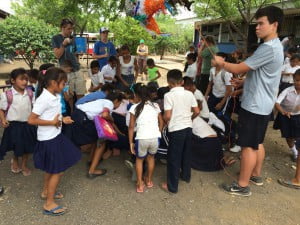 There was still work to be done after that nice little break, and so we threw ourselves into it with vigor. The tree and soccer field groups were able to wrap up a bit earlier than the others, and immediately set about helping the remaining groups. The last desk was set out to dry at around two, marking the completion of that particular job. All that remained was the mural, and thanks to the combined efforts of all the Glimpsers, that project accelerated towards completion. 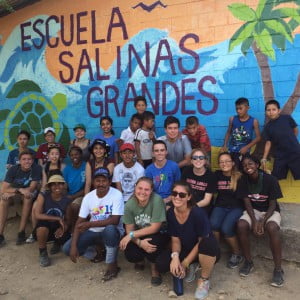 The mural was finished entirely at 2:45, and, after some cleanup, we made it on the bus by 3:05, only 5 minutes behind schedule. Once we got to the hostel at around 4, we quickly disembarked and ran straight for the showers to scrub off the paint and dirt we had accumulated from the day. 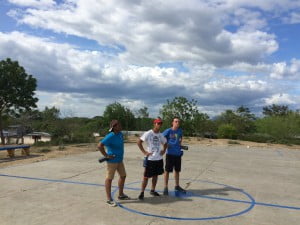 The next hour was spent showering, grading and preparing for the talent show, and at 5 we had a nice dinner at Deja Vu. Rather than our typical English tutoring class, we instead had a graduation/talent show. Almost everyone on the trip participated in some capacity, and after the show we handed out certificates to our students. A few pictures later, we were done with our experience as English teachers, an experience that everyone enjoyed. 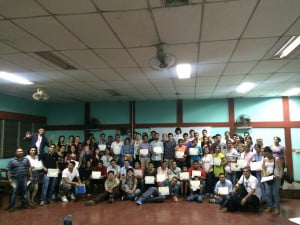 All in all, it was a very busy and productive day, full of work and celebration. Tomorrow we get to slide down a volcano, which should be a nice departure from the tough work of the past couple days.