Hi, this is Hurley and Ashley! Today was our first day of the Community Action Project. It was a struggle to get everyone organized and work under the rain, but despite the on and off rain, it was one of our most productive days. We started off by assigning everyone to groups. Some shoveled sand through a shifter to be later used to mix with concrete, some handed blocks to workers to build the walls for the community center. Others used a shovel to mix cement, sand, and water for the mortar. After about a couple hours, it started to rain so we took shelter in a little store and we hung out and ate snacks until the rain passed. A giant truck pulled up next to the construction site carrying the blocks for the walls and when the rain stopped we went outside to form an assembly line to unload the blocks. Our fearless leader, Andrew, would pass the cinder blocks down to the first person in the line who passed it to the next. They passed the block from one person to another until it reached the inside of the community center. A person would align the blocks and stacked one atop the other. Together we unloaded all of the 290 blocks! After working for three hours, we broke for lunch. We had rice and beans with chicken cooked by our incredible chefs from the hotel. After singing and dancing with the locals, we finished our lunch and went back to work for three more hours. Tomorrow we expect to finish the walls, make two concrete benches, plant trees, and create pathways.

Everyone was able to work together today! Despite Hurley’s lack of Spanish, he was able to communicate with some of the community members. Also, Ashley was able to lift the same blocks as everyone else. A couple of main takeaways from today were being flexible with a changing schedule, working together, communication, and persistence. Many of us are new to a construction site, but we were all able to sift sand, build muscles they never knew they had, and understand how to mix concrete. We are extremely excited for what is planned for tomorrow! 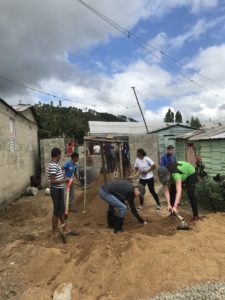 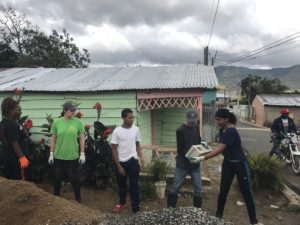