Today was the day we started the community action project, and surprisingly, it went smoother than we thought it would. It started with leading the others to the park grounds where we separated into two groups:  those who would stay and clean the park, and those who buy the list of supplies. We decided one leader should go help buy the supplies needed while the other leader directed the cleaning assignments, which was not fun, because deciding which tone of purple is the best for the park is the most excruciating decision a human being has to make, along with balancing a budget so that our money wouldn’t disappear like magic. After everything we needed was bought, we were finally able to get to business.

The Sonati people were already present and when eventually the cement and bottle caps were available, we got to work. Our idea was to create the image of the earth with recycling arrows images surrounding it. The Nicaragua flag colors would be bold in the background, while the Estelí symbol wizard would be placed on each corner of the flag participating in recycling activities. Our message: To show the Estelieans how important it is to recycle, not only to Nicaragua but as well as the rest of the world. When visiting the dump we realized that there were huge recycling problems, and that more people need to be aware the problem that happening at the dump. Not only have that, but the people who actually live and work in the dump suffered from poor oxygen intake, so the message of recycling matters even more so for the people of Esteli. Gladly, the mural is coming along very nicely, and it will hopefully bring the change that needs to happen.

As for the clean-up crew, we started to clean up the dead leaves and picking up the trash that seemed to scattered all over. People also started to pick up glass bottles and putting it in recycling, to get the recycling movement started. We directed others to start painting the blocks in specific sections of the park, bright blues, reds, yellows and purples to mask the dark colored blocks before. And as time progressed more and more people showed up and the impossible mass of people seemed impossible to work around, but we preserved. And you could actually see the smiles on the parents and their children faces when they realized what we were doing. After this day is the second part to the park reconstruction I hope we get as much progress as well a happy faces tomorrow. 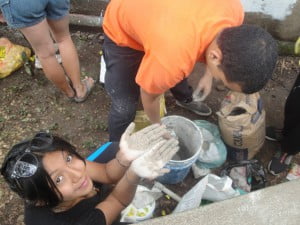 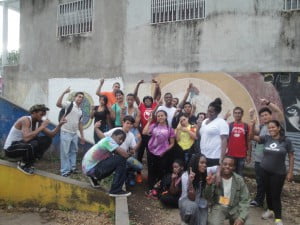