Posted in RB1A Riobamba 6-6 by Gene, Albert, and Jeremy, Glimpsers

“Tell me and I forget, teach me and I may remember, involve me and I learn.” -Benjamin Franklin

Hello from your leaders of the day: Gene, Albert, and Jeremy! Today, our Glimpsers had the opportunity to be involved in an incredibly ambitious project with the intent of helping the community. Our Community Action Project (CAP) is the culmination of an intense week of intricate planning, discussing, and hoping. After the results of the day, we believe our hard work has most definitely paid off.

We began the day with an early 7:00 wake up call, utilizing Gene’s incredible cover of the song “Newsies,” to motivate the Glimpsers. After a walk to Roma Santa, our Glimpsers enjoyed another amazing meal of breakfast sandwiches, fried eggs, and a variety of fruits. After catching a quick glimpse of the World Cup at breakfast, we quickly headed off to our CAP Project.

Before the project, we had already assigned roles to each Glimpser to cater to our strengths and effectively accomplish the goals we had set for ourselves. Six “Supervisors” were in charge of leading the others and making key decisions for the CAP. Four “Purchasers” had helped us purchase all the materials needed beforehand, which were already transferred to Carlos Garbay the day before. Around 10 “Painters” formed a crew whose goal was to paint the various tires, playground structures, and arrows at the site, while the rest were put into “Manual Labor”, the main crew to work with the champas, or the grass that we were to plant in order to give the students a place to play.

After breakfast, we split up into two buses: the painters went into the smaller bus, with two supervisors, and headed straight to the site to start painting. The manual labor crew, with four supervisors, headed off in the larger bus to get the champas. To obtain the grass we needed, the manual labor crew used hoes to cut rectangles of grass, which were then loaded onto a truck assembly-line style. Afterwards, these were transported to Carlos Garbay, where they were placed on top of the fresh soil recently brought to the school and watered. 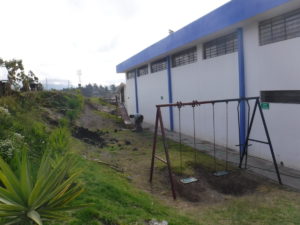 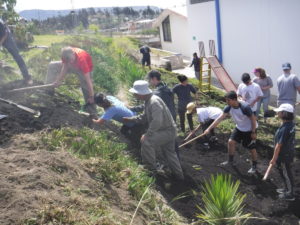 Meanwhile, the painters met with Carlos Garbay’s director and acquired the supplies to initiate the working process as soon as possible. Equipped with masks, gloves, hats, sunglasses, sunscreen, paint buckets, and brushes, the painting team immediately began painting the numerous tires located around the campus. Under the supervision of the director, our Glimpsers worked efficiently before the manual labor crew arrived. Several of the workers from the manual labor crew then split off to create stencils in order to get a head start on spray painting the arrows around the campus. 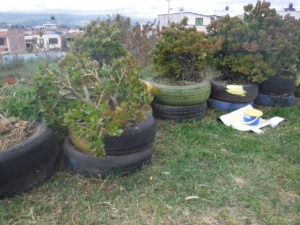 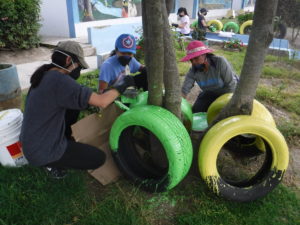 Working tirelessly and constantly under the sun, both of the teams’ hard work was visible after spending nearly 4 hours at the site. We had successfully painted 75% of the 110 tires and both of the playground structures we had originally planned, as well as 15% of the arrows. The manual labor crew had filled approximately half of the field with champas. On Monday, we plan to finish painting the remaining tires, arrows, and footprints. We also hope to fill the remainder of the field with the grass.

After heading back to eat a delicious lunch at Roma Santa (fish, rice, and vegetable soup), we headed back to the hotel to review our progress and briefly plan for Monday. Then we had an hour of free time, where several groups of Glimpsers had the chance to go to various shops while others took a shower in order to prepare for English tutoring. We were split into two groups after this free time, where those of us who tutored yesterday remained at the hotel for mandatory relaxation time, while those who relaxed yesterday headed off to tutor English. The two groups reunited at dinner time at Roma Santa.

For dinner, Mama Isabel served us chicken pasta, salad, and herbal tea (good for your skin!). We then returned to the hotel where our Program Coordinator Jerry led a seminar for tomorrow’s activity, in which we will experience working and living like a local. At our nightly meeting, our new GGL’s Clarisse and Nancy L. presented their talent of reciting every Glimpser’s name backwards. We handed off the Leadership torch to them, and are about to get some rest after the long day we had today, expecting another fun and educational day “Living and Working Like a Local” tomorrow.

Big love to all our friends and family,