After a day of air travel and a brief night in Quito, our group awoke to a delicious breakfast prepared by the staff of the hotel. The coffee was quite good and helped to energize our minds for the day of travel ahead. Upon finishing breakfast, we took a tour of Quito and saw some cool landmarks and there were some especially cool places. We went to the market and walked past some colorful fruits and other foods. A personal highlight of mine was seeing an enormous jackfruit on display. 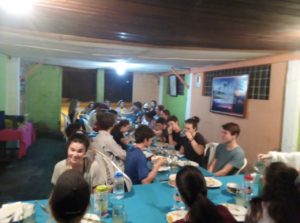 Another part of our experience in Quito was learning a local myth about an indigenous man who everyone thought had a deal with the devil (due to his wealth and the fact he was indigenous). This man’s job was to build a wall in a certain amount of time, and, if he did, the wealthy upper class citizens and the city would let him build the first indigenous church. He tried but realized he couldn’t succeed. Before his deadline came he sold his soul to the devil, asking if he could have this wall built in exchange for his soul. The demons the devil sent built and built but also couldn’t complete the project because the man secretly kept a piece of the wall. The wall was built and the man kept his soul and got to build his church. The church is still there and in front of it stands a statue of demons building a wall with the devil. 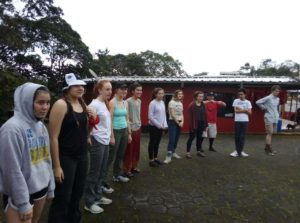 After our tour, we got on a bus to begin the journey to Bahia. Personally, I was wary of parting with my phone, but, by the end of the day, I was particularly grateful that we were given the opportunity to part with them, as we spent the bus ride getting to know the people we had met and begun our journey with. We’ve all connected more through games, songs, and brief naps.

We look forward to getting to know the city of Bahia and the local eco-club kids tomorrow! 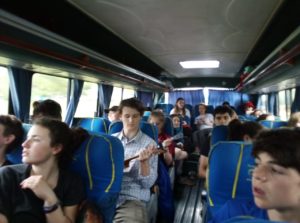