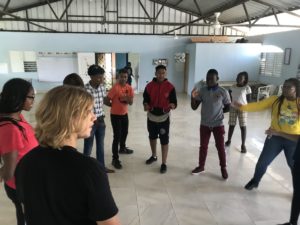 Today we all learned how poverty looks in the Dominican Republic, the main factors being racism and education. While visiting La Vega dump we witnessed how the buzos (dumpster divers) worked on a daily basis trying to earn money from materials such as bottles, metals, cardboard, and plastics. We learned this by interacting with the workers at the dumps. After we left the La Vega dump we went to Centro de Vida, which was a church where we will be focusing on our CAP. The main message we took away was that the cycle of poverty never stops unless you put a stop to it. For example, if you don’t get an education at an early age you’re most likely to not get a well-paying job, and this will affect your kids, and so on. With racism, we noticed that people of color get low-paying jobs with harsh conditions. We were surprised by the extremely harsh conditions people were faced with, especially when we went to the dump due to weather and working hours.

When we visited the church, we were proud of the group because we all interacted and asked questions to the community members/leaders. Tony, who was a community member, was the most inspirational person because he helps people to create change in the community and that motivates him to be a better person. Being Lider Del Dia was at first scary and stressful, but as the day went on it became less stressful with the help of our peers. “Some things I learned about myself today showed me that I can speak in front of people and be confident even though I am very quiet” – Roxana. “I usually don’t take on the role of being a dominant person in a group but being Lider Del Dia showed me that I can take control of the group when needed.” – Natalia.