We wanted to start of today’s blog post with a quote. “Overcoming poverty is not a task of charity, it is an act of justice. Like slavery and Apartheid, poverty is not natural. It is man-made and it can be overcome and eradicated by the actions of humans beings. Some it falls on a generation to be great. YOU can be that great generation. Let your greatness blossom.” (Nelson Mandela). Let that sink in for a second. In fact, read it again. Great! Now you are read to read the rest of this blog. This quote encompasses exactly what today was about for us. Today was about understanding what poverty means, how it originates, and how to fight against it.

To provide a little more context, let’s go into a brief overview of today. This morning was pretty standard. The group woke up at 7:00am, which meant we woke up at 6:30am. It was cold outside this morning! But that just provided a little extra kickstart to the day. We fueled up for the day during breakfast, and then we were off. We got on the bus to drive to Parque Maldonado, which is where Manitas Trabajadoras do their activities. Manitas Trabajadoras is an organization that works with kids that work on the streets. Every Saturday they provide a lunch to the children, while also organizing various activities to help keep them motivated. This includes making sure that they stay in school. We got to the park around maybe 9:30am and were introduced to the kids we’d be working with for that day. 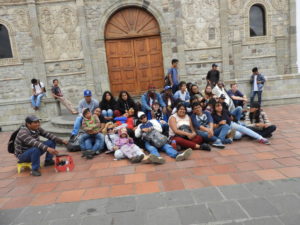 The two of us were working with a little boy named Frank. He goes around Riobamba in order to shine peoples shoes for money. Let us tell you, the little guy is fast! Everything he does seems to be with a sense of urgency. His walk, the way he drinks, the way he works. Everything seems to be oriented to being efficient. Getting in and out as fast as possible to get the most amount of work done in a short period of time. This of course has a lot to do with what Frank has to do in order to get some basic necessities. He told us about how his school uniform or school supplies can cost up to $75. That is a lot of money. Frank will get between 2 and 7 customers a day and the average amount they will pay him is probably around 50 cents. Assuming he gets the maximum number of customers every single day (which does not happen. We were with him for at an hour or two today and he got one customer), it would still take him three weeks of working every single day in order to go to school. And that is assuming that he does not have anything else he needs to spend money on, which is extremely unlikely. It was a fascinating experience spending that time with him. It is interesting to see how different our worlds are. How hard Frank has to work for something most Westeners will take for granted. The right to an education. Being able to eat three meals a day. 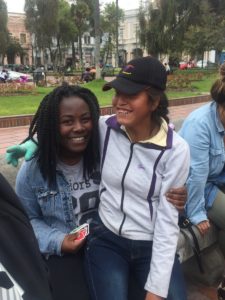 We got back to our meeting spot around 11:30am, and we had lunch and got to talk a little bit more to the leaders of Manitas Trabajadoras. Then we had some time to roam the streets of Riobamba. We’ll skip over that part. At night, we had a group meeting. This is where some of the real deep important conversation about today started to take place. 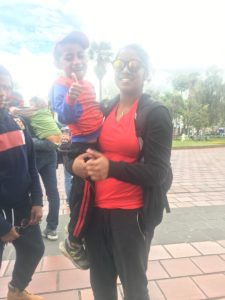 We started by talking about what the definition of poverty is. Too often people associate poverty with a single number. There is a value where if you are earning less than a certain amount of money, you are considered to be in poverty. This is absolutely not the way to think about what it means to be in poverty. It is not incorrect to think about poverty being related to a lack of material possessions. It certainly plays a factor. However, it is absolutely not the full story. So much of whether you are in poverty has to do with how you perceive your situation. How well you are able to enjoy what you do have access to. Gianella and Danny spoke of poverty having to do with not having access to certain basic necessities or not having access to certain privileges. And that is very much showing the balance between material and non-material wealth. At the same time, however, someone who does not have access to basic necessities or privileges is not necessarily poor. 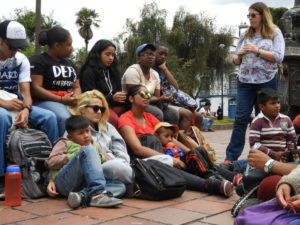 Diego mentioned that a big part of poverty is injustice. That poverty stems from and exists because of injustice. That injustice creates that snowballing effect that turns into poverty. In a simple example, part of injustice might be two different people not having access to the same quality of education because of their economic status. That is not right. These kinds of systems, where money determines the quality of education your receive, feed poverty and inequality. Rather than having success and happiness be based on effort, it is totally depended on how much you are able to spend education. Therefore, the cure to poverty is justice and equality. In regards to education, which honestly is just one part of the puzzle although a very big one, we might look at countries like Finland. In Finland private schools are illegal, which has vastly driven up the quality of the public education system. This is one absolutely perfect example of how we, citizens, and government can work to end inequality, and in the long run poverty as well. Keep that in mind as you go through your days. Look at what things exist in your life that are an example of inequalities or injustices that can lead to poverty. Start being aware of these things, because being aware is the first step towards change.