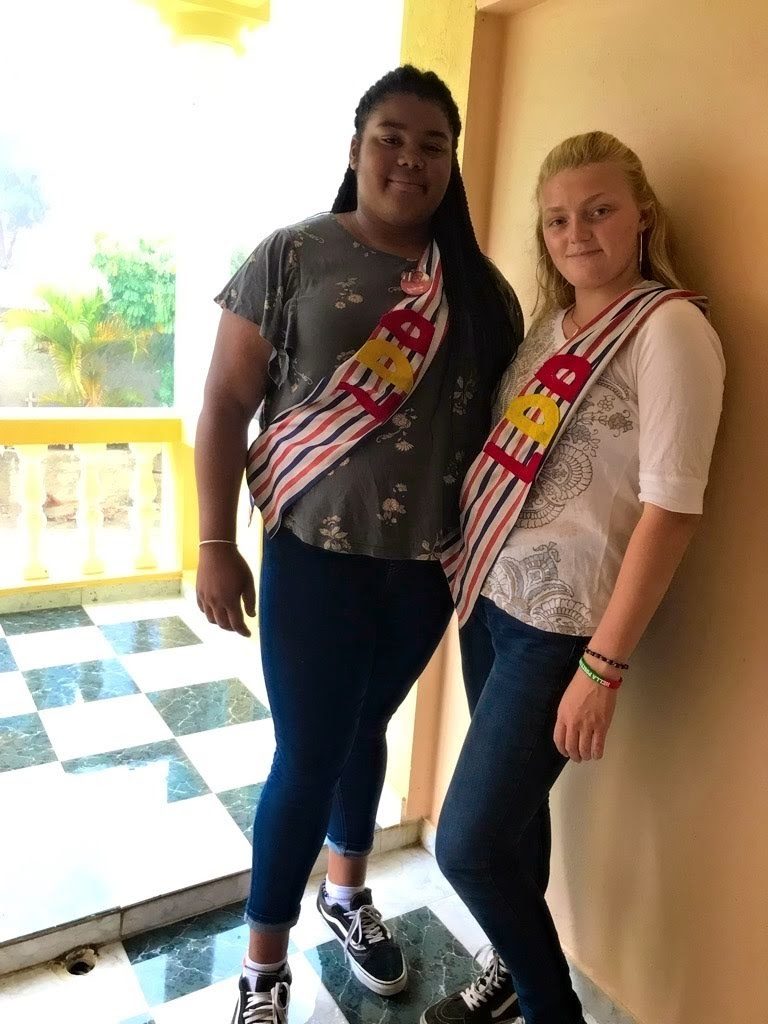 Hello family and friends, today’s theme of the day was Deconstructing Poverty day! We are Cherrish and Zoe and we were Leaders of the Day today. We started off the day with a very good breakfast which consisted of mashed pumpkin, scrambled eggs, and fresh pineapple and watermelon. After breakfast, we got on the bus and made our way to the city dump. Once we arrived, we saw huge heaps of trash and a lot of smoke in the air due to the burning of the trash which happens naturally from the heat and dry brush that comes from agricultural workers. The strong smell of the trash and the smoke made it difficult to breathe even as we were still sitting on the bus. When we got off the bus, we were greeted by Roberto, Frank, and Elias, who were all workers at the dump.

We then were separated into groups with the three speakers and, in these groups, we learned more about the personal lives and what a day in the dump consists of for dump workers who in reality live in extreme poverty. We learned that many workers in the dump have been working there for many years and their only source of income is what they find, collect and sell.  Some of the things that we also learned about were that in the Dominican Republic, more than a third of the population (over 3 million) lives in poverty and survives off of $1,200 US dollars per year or less. However, these statistics do not really show the tough conditions that workers in the dump deal with on a daily basis. I can’t imagine what it is like constantly dealing with the smell of the smoke and the tons of trash that they have to sort through for so many hours a day to barely survive. What I also realized is that these statistics also can’t show the resilience and strength that these workers embody. I think the most important things that I took away from today is not only how to be a leader but also how to cherish the little things that many others do not have, like basic needs such as clean air, fresh water, basic nourishment, and health care, just to name a few things.  Many of us have stories that reflect one another so I will never take for granted the time that we have together and the memories that we will make as well. 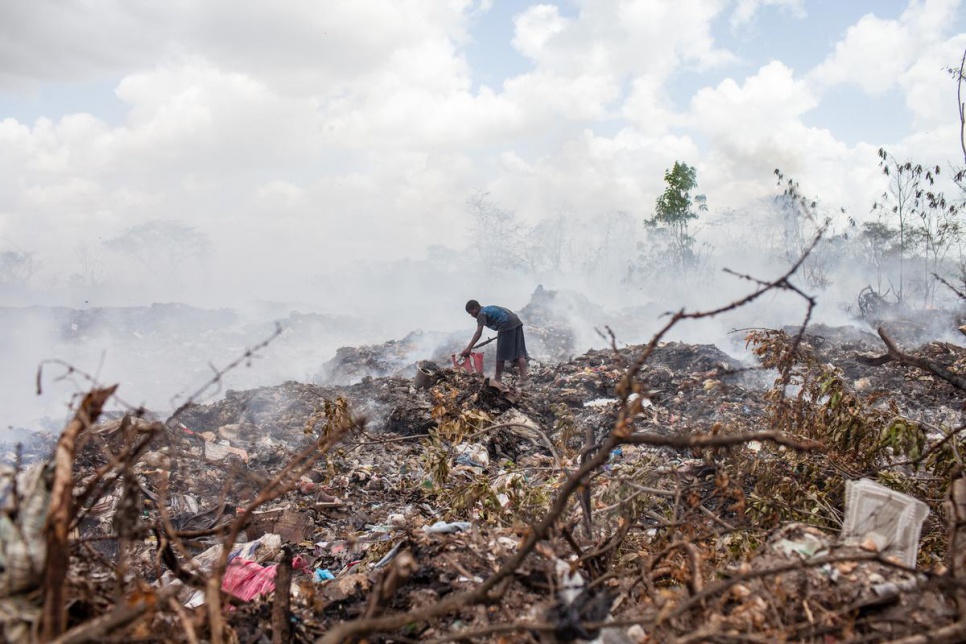 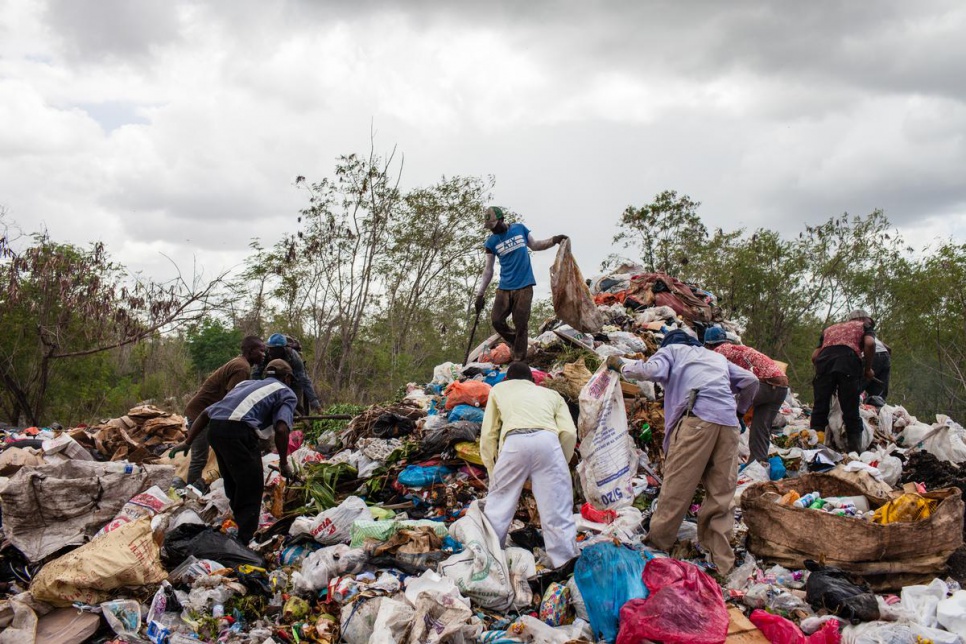 After we talked with the workers at the dump, we gave them snacks that we had brought along. One thing that one of the workers said that really stood out for me was that some of the people in Constanza most likely do not even know about the awful living conditions in the dump and the fact that most who work there live in cardboard houses at the dump as well. He also said that some of the people of Constanza do actually know about these conditions and still make no move to improve these conditions at all. One of the questions we asked was why the workers don’t leave and go to another job and their response was that the hours are more flexible at the dump, and if you have a good day, you could make the equivalent of what an agricultural worker makes in a whole day in just one hour at the dump.

After this emotional eye-opening experience, we had a silent ride back to the hotel to have a group reflection. It was there that we discussed our feelings about what we saw at the dump and also what we thought were the root causes of poverty. We discussed the question,  “what privileges do you have in your life that people you met don’t have and how do you think it will affect their future?” Some of the answers were about how we have access to free education, that education can save somebody from pushing away their ambitions and push them to work for a better life. Another point that was brought up is that many Americans know their rights. Many Americans can also stand up to our government and fight to fix some of these issues. This is a stark contrast to the people we saw at the dump today. They do not necessarily know that their wages, living, and working conditions are not safe nor acceptable for human beings. After our discussion that ended in some passionate tears, we hugged one another and cared for each other as we transitioned to prepare for our next activity. However, before we were able to leave to do our English tutoring, we experienced heavy rainfall, it was the most rain I have ever seen in my entire life!  Our driveway to the hotel was overflowing with water and some of the walkways had gotten wet due to the openness of the hotel. Since this heavy rainfall was so intense, we had to cancel our activity and our tutoring because a lot of the parents of the children that we teach were calling Silvia and Fabi to say that they were not going to let their child go out with it raining that hard. Instead, we hung out and ordered TONS of food from the bakery down the street and had a writing seminar. Also hey mom, dad, Quinn, and Eli I miss you! And my girl Bri, Randy, Marcos, Dani, Silvi, and Fabi, say hi and of course so do I! 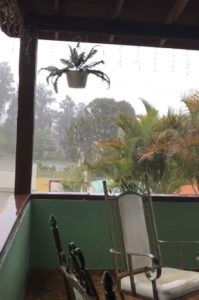 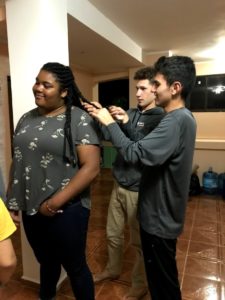 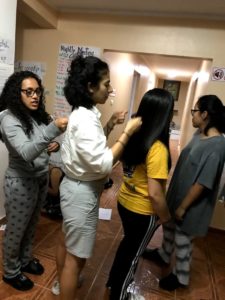 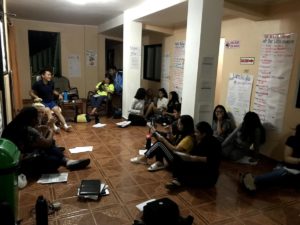