Exploring Ecuadorian Culture Beyond the Walls of Riobamba

Hey everyone, this is Nicole who was Leader of Day today (Líder del Día).

This morning we woke up bright and early at 7:30 am, where we had dragon fruit, toasted bread along with eggs, nothing as suspenseful as the food we ate for lunch. For each meal, I had to translate the menu from Spanish to English. Though I may have butchered some of the words, I was welcomed with laughter and comforting words to continue. Everyone seemed fatigued from the previous night, but that all changed when we played an energizer game after we returned to the hotel. Quickly everyone was full of energy and ready for the activities headed towards us for the rest of the day.

Once everyone was informed about the indigenous reservation we were going to visit, we took a bus ride up to the mountains in Cacha. The site was amazing. High in the mountains, we had a beautiful view of all of Riobamba; including all the colorful houses and stores that came together to create a beautiful image. We first visited a museum to learn all about the indigenous clothing, paintings, money, cooking tools, and how these items are made. Each indigenous artisan takes pride in their craft.  To provide for their families and preserve their culture, many of these practices are carried on into the present day. This was followed by a spiritual purification ceremony where three chosen glimpsers – myself, Kirsty and Carolyn – along with those of the group who volunteered were cleansed of bad energy with various types of plants that were gently patted on their arms and legs.  Many glimpsers proudly participated and enjoyed their time. 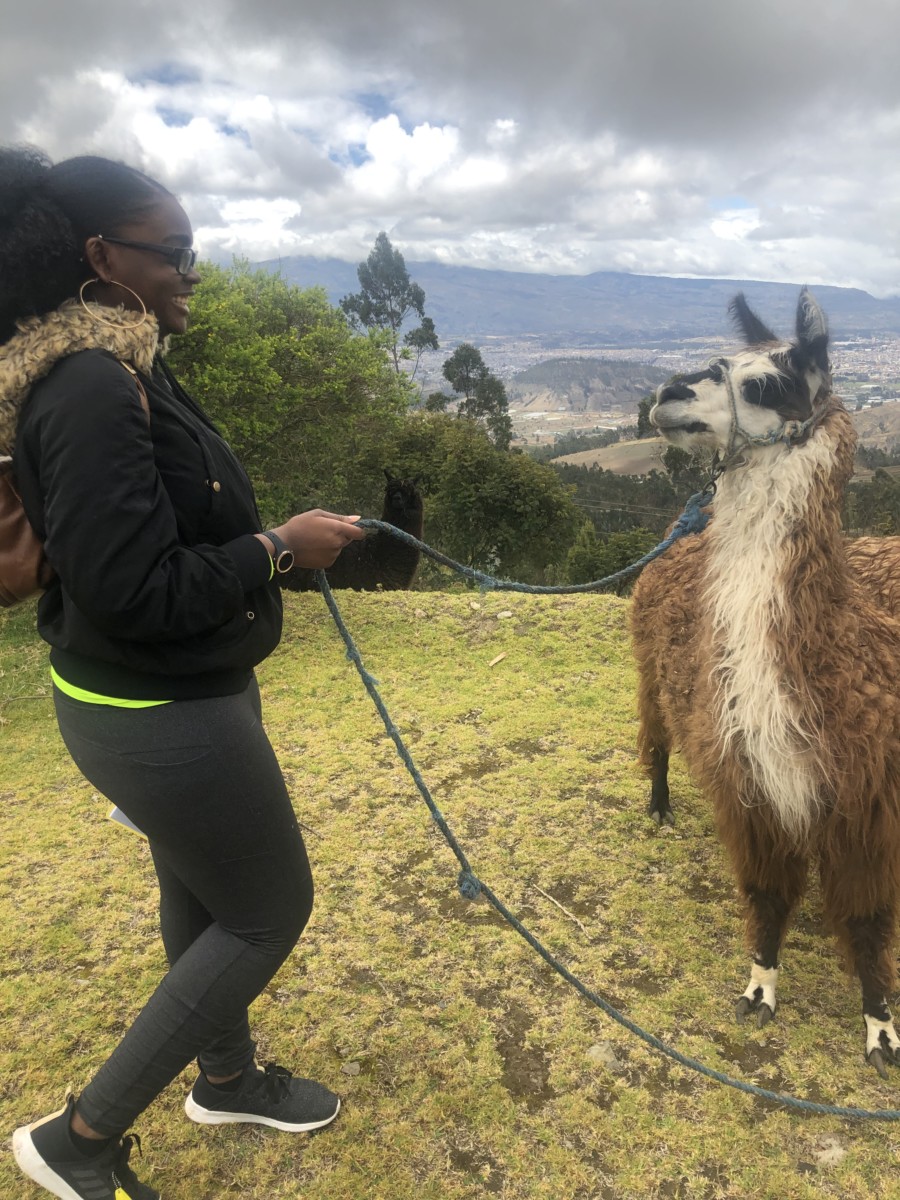 Prior to lunch, we were guided on a tour of a botanical garden with different types of healing and medicinal plants. Right next to the plants were deep holes filled with our soon to be lunch, guinea pigs, also known as cuy in Ecuador. Many of us were fearful of what we were about to eat but along with the cuy was corn on the cob, fava beans, roasted corn, and well-seasoned salad. Almost all of us were brave enough to try it. Three glimpsers – Vishay, Michael, and Matthew – even ate the head and both the eyes of the guinea pig, while the others ate the skin and meat. 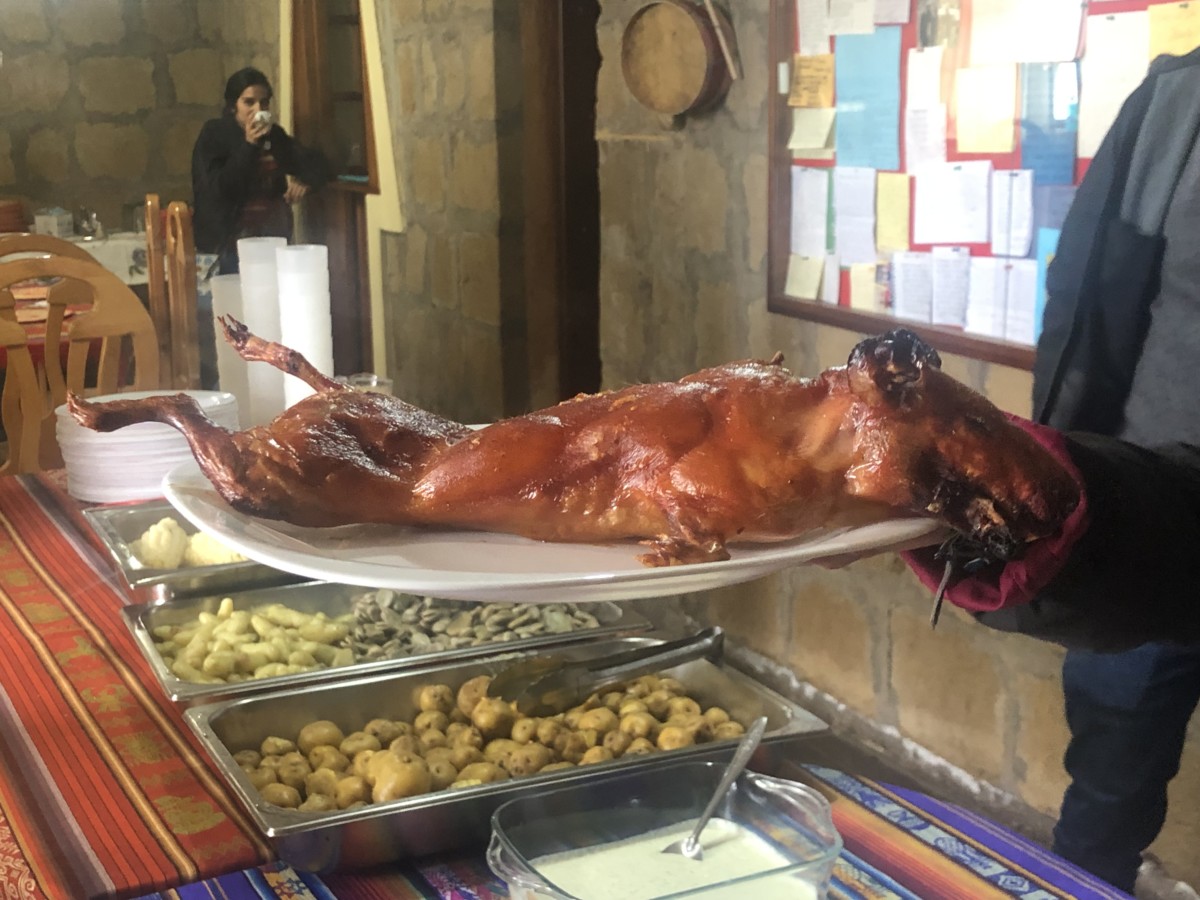 After we were well fed, we headed outside to take pictures of the mountains, lamas, and one alpaca. Though lamas are known for spitting on people, the two we encountered were very friendly. Well, one llama did spit on the llama handler while everyone was taking a group picture. Once we gathered all together to take pictures it started raining, therefore we headed back to the bus to Roma Santa to learn traditional Ecuador dancing. 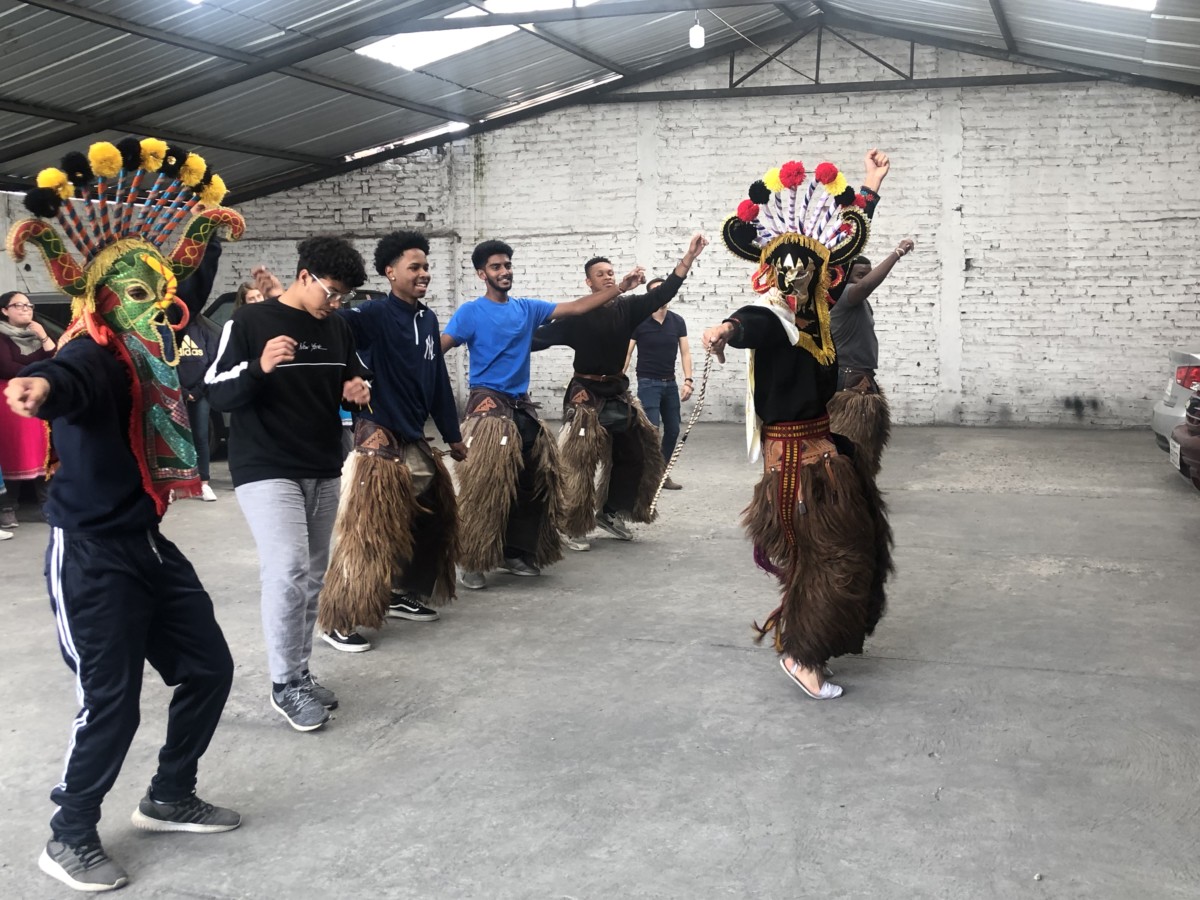 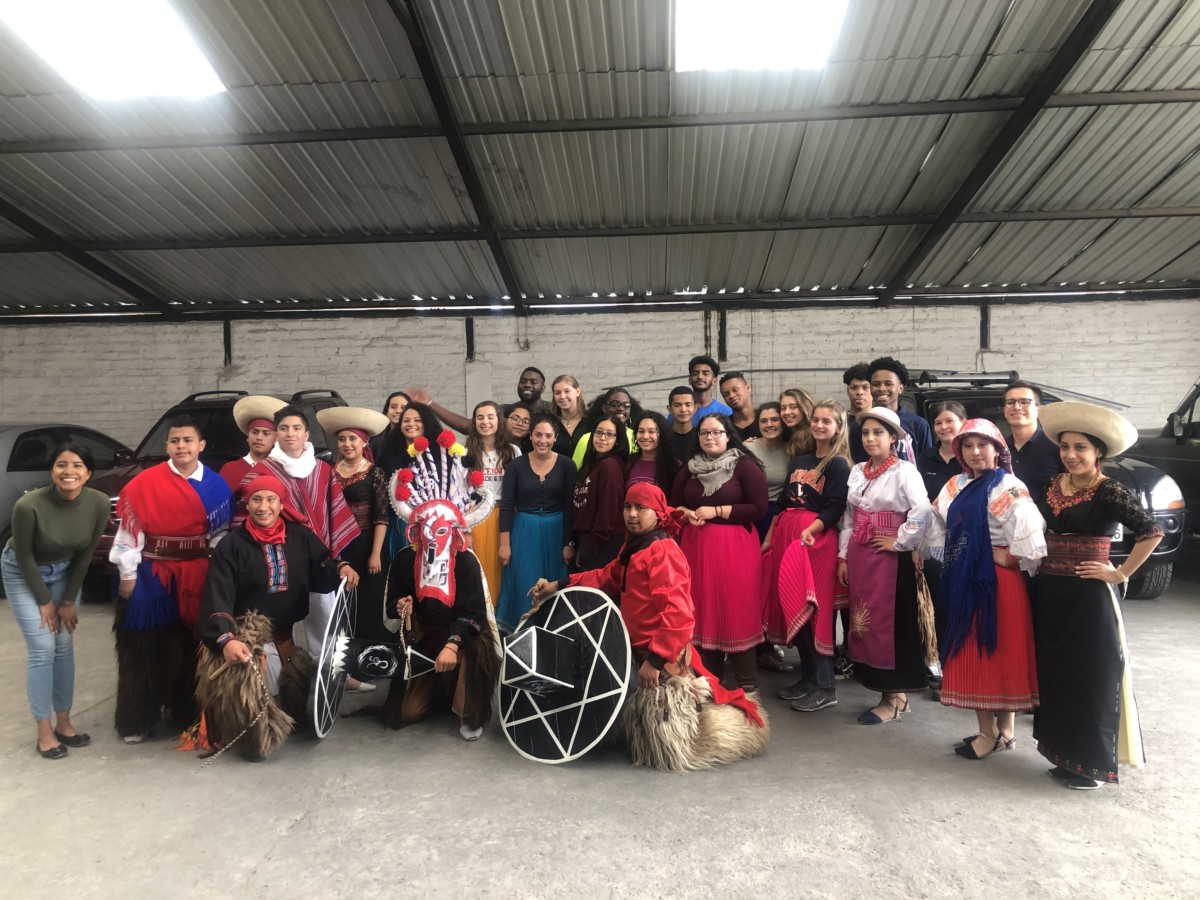 During our dancing lesson, we became familiar with the traditional clothing each female and male wore for each style of performance. Along with two professional dancers and the instructor, we learned a total of 4 dances. One of which, had pairs of dancers in the middle a circle while the rest of the glimpsers danced in a ring around them moving to the left and right. The atmosphere was filled with laughter and enjoyment. Finally, everyone decided to play a game of tap where each player had to catch then throw the basketball to a new individual within the circle. Everyone, including Neilson, the son of the chef of the restaurant, joined the game. 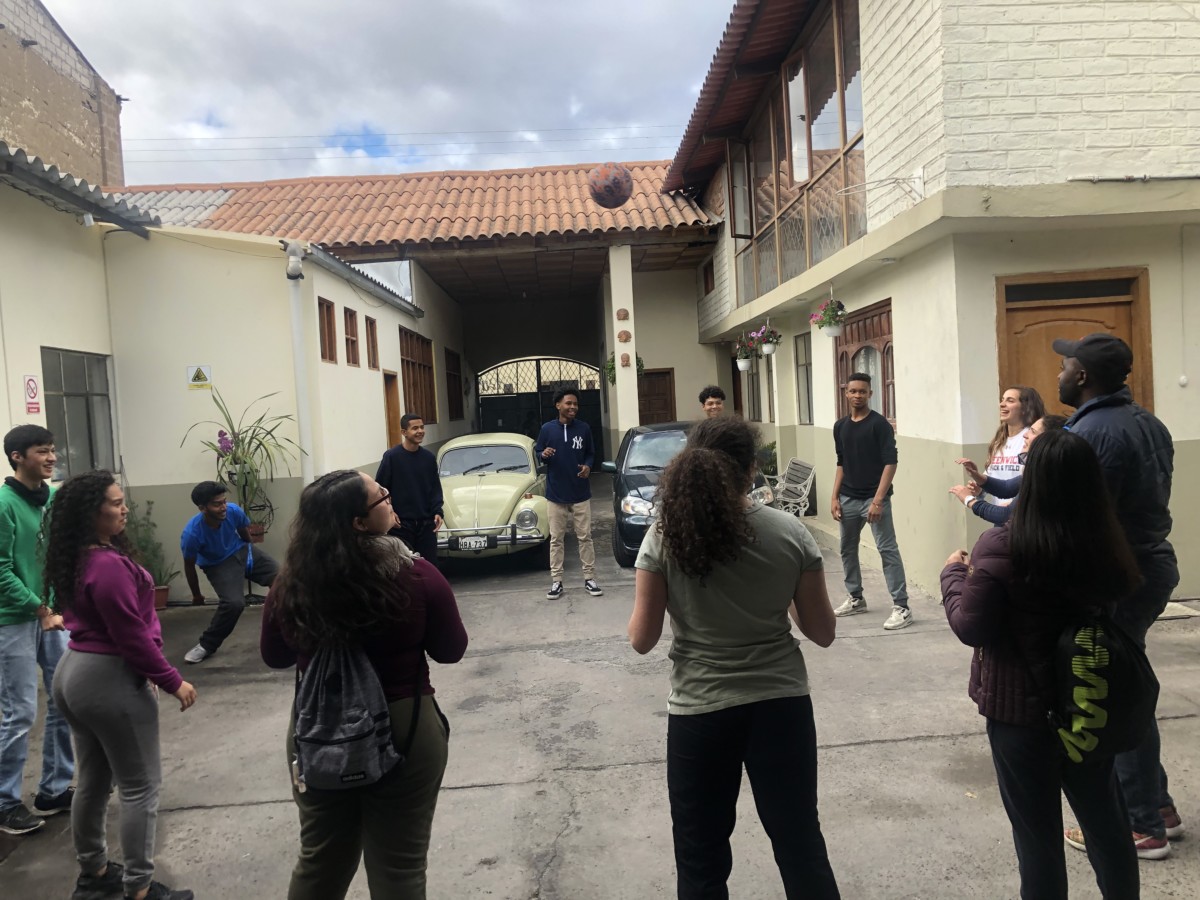 Today was not only a great opportunity to learn about Ecuadorian culture but to dig deeper into our own culture that is celebrated within the United States and families. Tomorrow is our first free day and we are looking forward to exploring more of Riobamba, Ecuador. 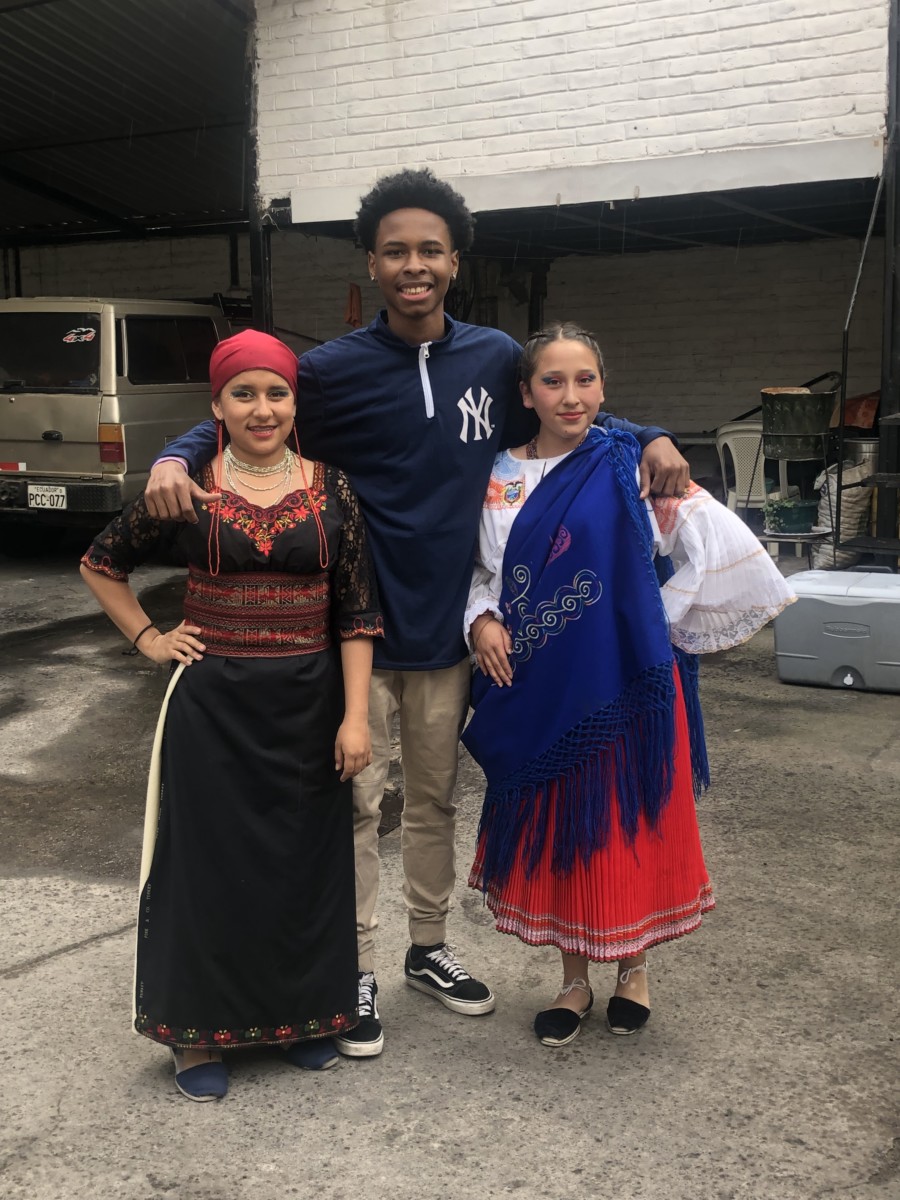