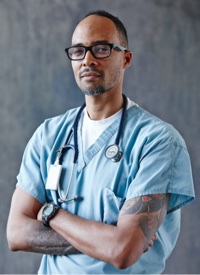 For the last 14 years, Brooklyn-native Dr. Gore has worked in emergency medicine. After witnessing so many tragedies that have affected healthcare workers and patients alike in his own community, working in the ER during the COVID-19 pandemic has been a life-changing experience for him. It has been a constant reminder about how much of a gift life is and has helped him recognize the importance of family and travel to him. Dr. Gore is also the founder of the Kings Against Violence Initiative, a nonprofit providing anti-violence and conflict resolution programs in hospitals, schools, and communities. 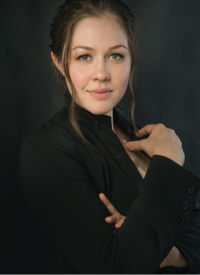 Veronika has built an organization around a single idea: bringing warmth and pride to the homeless. Her Detroit-based humanitarian project – The Empowerment Plan – is centered around a coat designed specifically for the thousands and thousands of people forced to live on the streets. Self-heated, waterproof, and engineered to transform into a sleeping bag at night, the coats are made by homeless women who are paid to produce them, offering them the opportunity to earn not just money, but pride and independence for themselves and their families. 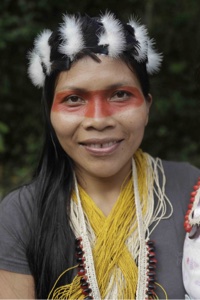 Nemonte Nenquimo, raised in the traditional Waorani community of Nemonpare in Ecuador, is one of the founding members of the indigenous organization Ceibo Alliance, which works to defend Indigenous people’s lands and rights in the Ecuadorian Amazon region. At the end of 2018, Nemonte was elected president of CONCONAWEP, an organization that represents the Waorani of the Pastaza province. In 2019, Nemonte helped to lead her people’s historic victory against Big Oil protecting a half-million acres of primary rainforest in the Amazon. Nemonte is also passionately engaged in the struggle to uplift Indigenous women across the Amazon. 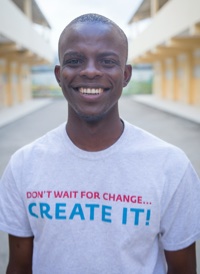 As the Founder of The Easy Connect Center, John’s work aims to make affordable, high-quality Internet access available in low-income housing and other underserved areas of the Dominican Republic. With a multicultural education and strong values, he has established himself personally and professionally in the Dominican Republic. He is an alumni of the Young Leaders of the Americas Initiative (YLAI), a program run by the U.S Department of State, where the 250 brightest young entrepreneurs from Latin America and the Caribbean participate every year developing projects in favor of social and economic sustainability of the Region.

Vice President, Confederation of Indigenous Movement of El Chimborazo (Riobamba, Ecuador) Carmen is a Kichwa-speaking indigenous woman from Puruhúa descent. She became a political activist from a very young age and was the first female president elected in her community at the age of 25. During last year’s protests, she played an important role in the province of Chimborazo (Ecuador), actively defending human rights and fighting for more social justice. Carmen has been working with Global Glimpse for more than 4 years, accompanying our students to the field during their Community Action Projects (CAP), teaching them Kichwa, and giving lectures about the role of women in indigenous movements. 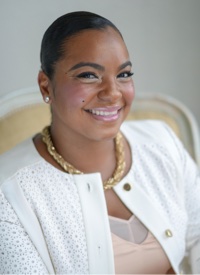 Chief Operations Officer, Caring Health Center Professor, Baypath College (Springfield, MA) Jacqueline has more than 15 years of professional experience working as a grass-roots community organizer and leader of diverse teams. Raised by a strong, single Latina mother in Northampton’s Florence Heights projects, her upbringing not only prepared but motivated her to be the best she could be. Jacqueline graduated from Mount Holyoke College with a bachelor’s degree in politics and urban development. She went on to earn a master’s in social justice from UMass Amherst, and started working for Springfield’s Caring Health Center when she was 21, as an HIV program director focused on management and prevention for people at high risk. Today, she leads the Caring Health Center’s development and expansion to improve healthcare access for the region’s diverse residents. 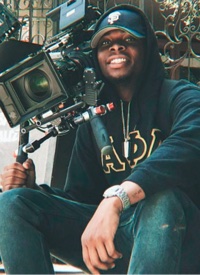 2014 Global Glimpse Alum (Los Angeles, CA) Growing up in Oakland, CA provided Takai with the perspective and social consciousness he needed to thrive as the artist he is today. Commonly known as takaitheartist, Takai is a creative professional with a lifelong passion for film and storytelling, along with other digital arts. Drawing on influences from artists of many mediums, Takai strives to have the voice of Banksy, the reach of Bob Marley, and the impact of Walt Disney. Takai graduated from UCLA, with a BA in Film, concentration in Directing. Takai, traveled with Global Glimpse to San Juan De la Maguana, Dominican Republic in 2014 and then produced a photo exhibit to share the stories of the Haitian farmworkers living in the bateyes that he met. Takai has been dedicated to directing and filmmaking for over 7 years and he has worked on numerous projects, including documentaries, music videos, and short films. Now, Takai looks forward to creating a lasting impact on this world through storytelling. Check out his most recent film project: United Voices of Humanity. 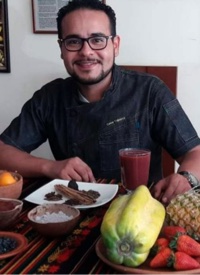 Owner and Head Chef, Nativa Gastronomía Ecuatoriana (Riobamba, Ecuador) Since the age of 5, Cesar enjoyed learning how to cook from his mother and grandmother and always knew he wanted to become a professional chef. When he was 13, his parent’s divorce forced Cesar to start working on the weekends and on holidays in a bakery to support his family with an additional income. He later studied Gastronomy in college while also working multiple jobs as a waiter, pizza maker, kitchen assistant, and dishwasher to help pay for his education. Over the last few years of his career, Cesar has become a renowned chef in Ecuador and is proud to welcome Global Glimpse students at his restaurant, Nativa Gastronomía Ecuatoriana, where they learn about Ecuadorian cuisine and take part in his cooking classes. 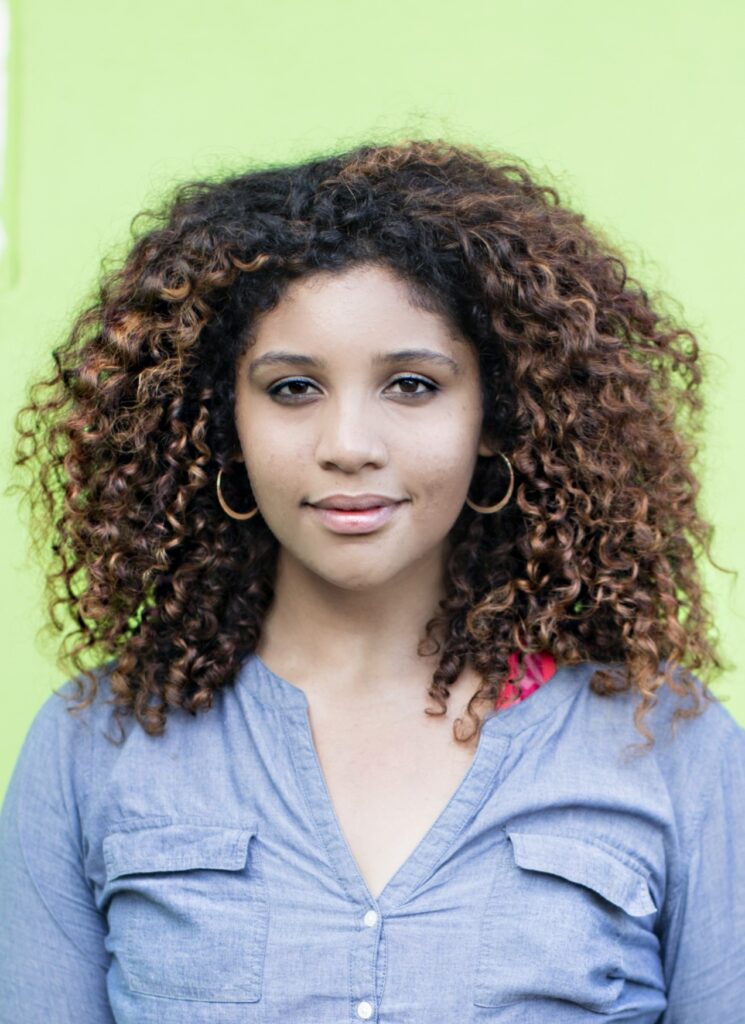 Alexandria Lafci is the Chief Operating Officer and Co-Founder of New Story – an innovative nonprofit that transforms slums into sustainable communities around the world. Alexandria has a decade of work, academic, and volunteer experience in domestic and international development. She taught in inner-city D.C., led financial capacity-building efforts in rural Central America, and briefed African heads of state on poverty alleviation through land reform, and was named to the 2016 Forbes 30 Under 30 list. 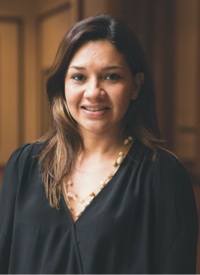 Co-founder, The Garden Café and UPNicaragua (Granada, Nicaragua) Xiomara is the co-founder of The Garden Café and Thousand Cranes, both businesses are based in Granada, Nicaragua, generate 30 full-time direct employments & work to promote positive community impact as well as tourism industry sustainability. She is also founder of Unleash Potential Nicaragua, a non-profit program that provides services to empower low-income Nicaraguan girls through education and mentorship. She has served on the US Embassy Youth Council and on the board of directors of Granada’s tourism chamber. She currently serves on the youth board of the High Commission Business Chamber in Nicaragua. 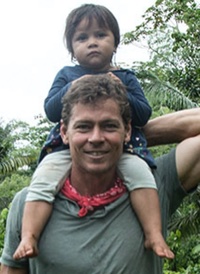 Founder and Executive Director, Amazon Frontlines (Lago Agrio, Ecuador) @AFrontlines Mitch has spent the past fifteen years supporting the struggles of indigenous people across the Americas. In 2011, he moved to Ecuador’s northern Amazon to begin a clean water project with the indigenous communities living downriver from contaminating oil operations. Through building nearly 1,000 water systems in over 50 indigenous villages, Mitch supported the creation of the Ceibo Alliance, an indigenous movement for land, life, and cultural survival in the western Amazon. Mitch has a 4-year-old daughter, whose name means “rainbow” in the Waorani language. 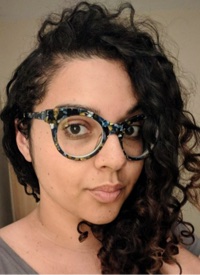 Create Your Space Studio Wellness Instructor (Chicago, IL) Outside of teaching academic writing at the University of Chicago, Ashley is a proud yoga instructor to a fantastic, inclusive, and diverse community of people in Chicago’s West Town neighborhoods at Create Your Space Studio. In her classes, you can expect a focus on alignment, longer holds, a sense of humor, and an emphasis on self-love. She believes yoga helps us approach our daily life with calm, adventure, and appreciation for all the amazing things we can do and be! Ashley completed her 200 hour training at Yoga For All Beings in 2017 as well as a Foundations of Yin Yoga training with the Summers School of Yin Yoga in 2020. She is looking forward to seeing our students on the mat and in the world! 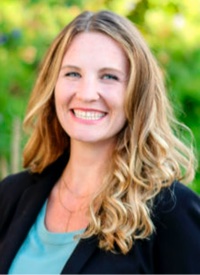 Executive Director, Global Glimpse (Springfield, Massachusetts) @elizarosaline Eliza is deeply committed to providing leadership, agency, and global perspective to youth from all backgrounds. Eliza built Global Glimpse’s first international programs in Nicaragua in 2008 and became the organization’s first full-time staff in the United States in 2009. Under her leadership the organization has grown more than ten-fold and expanded to serve over 1,000 students annually across 100 public high schools. She utilizes her extensive international and youth development experience to drive the organization’s strategy, lead development initiatives, and ensure program quality. Eliza Graduated Magna Cum Laude from the University of Massachusetts, she is bilingual in Spanish and English. 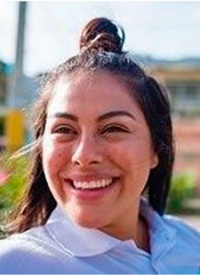 Bay Area Programs Coordinator, Global Glimpse (Oakland, CA) A Southern California native, Carissa grew in a sunny beach town and later packed her book bags North to California State University, Sacramento, where she received a bachelor’s degree in Ethnic Studies. Shortly after graduating from college, she joined the Peace Corps, where she served in the Dominican Republic as a Primary Literacy Promoter. It was there, along the Southern border, that she fell in love with traveling and good coffee. Not long after her service, Carissa embarked on a new journey with Global Glimpse. Her position in the Dominican Republic allowed her the chance to show others the world that she had so deeply fell in love with. After running three summer trips in the Dominican Republic, she wholeheartedly decided to come full circle and join the Global Glimpse team as the Bay Area Program Coordinator to serve as a bridge to different soils. 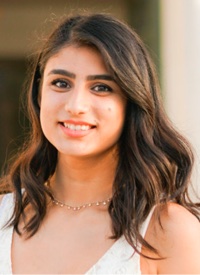 2014 Global Glimpse Alum (Hayward, CA) Avdeep was a Global Glimpse student at Impact Academy High School in Hayward, CA. She had the opportunity to travel to Bonao, DR during the summer of 2014 and credits her Global Glimpse experience for opening her up to travel possibilities and the inspiration to pursue a career in international development. She graduated from UC Berkeley in May 2019 with a B.A. in Political Economics and extensive study abroad experience. Most recently, Avdeep was a Princeton in Africa fellow based in Nairobi, Kenya working for Population Services International to build a social enterprise around women’s sexual and reproductive health.

Chelsey was a Global Glimpse student at Independence High School in San Jose, CA. She traveled to Matagalpa, Nicaragua in the summer of 2012 and later interned with Global Glimpse. She grew up in East San Jose, shaped by the rich diversity of the Bay Area and the nuances of growing up in a multicultural home. Her interest in stories, people, and travel motivated her to move to Washington, D.C. where she earned her Bachelor’s Degree in Film & Media and minored in International Relations at American University. She is now home working alongside the community she grew up in as the Marketing and Communications Associate for SOMOS Mayfair which strives to foster early school success and nurture family wellness to support East San Jose families’ immediate needs and future prosperity.