“Life is not about how fast you run or how high you climb but how well you bounce.” –Vivian Komori

Hola everybody! Jennifer Lam here to fill you in on what went down today, AKA fun day! Us now early birds rose up bright and early at 5 AM, tired, but ready to take on all of the fun activities planned for the day. Everyone awoke to a simple knock on the door along with an expected “Good morning”! An hour later at 6 AM, we all gathered outside for a breakfast of ham sandwiches, egg sandwiches for the vegetarians, something that you would expect to have for lunch rather than breakfast, but no complaints here! After breakfast, everyone gathered their needed belongings—bathing suits, flip flops, towels, sunscreen, and bug spray— for a day full of surprises and adventure!

After all of the Good Neighbors were accounted for, we loaded onto the bus and we were off! The bus ride to a historical location, Volcan Masaya, was about 2 hours and 30 minutes, which meant extra rest for those sleepyheads. When we arrived, we first stopped at the museum, which had some quite amazing pieces of art and tons of information on the history of the volcano. By 10:30 AM, we were off to see the actual volcano. Though we weren’t allowed to climb the lengthy stairs that lead up to the top of the mountain due to unsafe conditions, we were still able to get a good idea of what the bottom of the volcano looked like. Just kidding, it was all steam that reminded the San Franciscan GN’s of home. Fun fact: During the revolution in Nicaragua in the 1970’s, those who were captured were thrown into the volcano, which is how the volcano received its nickname “Devil’s Mouth”.

At 11 AM, there was a change in the order of plans and we headed to Mercado de Masaya, a well-known market with a mass of overpriced souvenirs. Luckily some of us were able to bargain with the sellers, otherwise we would all would have gone broke. We split up into groups and met up after a short 35 minutes and headed out to Tip Top (Nicaragua’s version of KFC) for lunch. We were seated upstairs in a long row of about 6 tables in order for everyone to sit together. After a 15-minute wait for our food, which consisted of chicken, coleslaw, and French fries, we all excitedly chowed down on our meal. With our stomachs bulging with food, we hung out for a good half hour to digest before we headed out to Laguna de Apoyo, also known as Monkey Hut.

By 2 PM, the Good Neighbors arrived at Laguna de Apoyo, where we ran into another delegation staying in Estelí! It was exciting to see and interact with another delegation, even if it was only for a short period of time. We were put into groups for when we wanted to buy drinks, and then we were off to the lagoon! The scenery was absolutely stunning and it was even more amazing knowing that the lagoon was originally a crater from a volcano. As soon as we got settled and changed, we all ran toward the water like children, with donut floats and kayaks to play with. After three failed attempts at trying to fit two people onto a one-person kayak and flipping over every single time, Angela and I gave up and decided to just take some donut floats and float out to the wooden island on the lagoon. It was shocking and heart-warming to see those who were unable to swim pull on a lifejacket and go kayaking or put their life in the hands of the donut floats. After a good two hours, some of us managed to drag ourselves away from the water to grab a drink from the bar and just relax. Though it was a rather gloomy day out, the weather fortunately did not affect our experience at the lagoon at all.

The bus arrived at Laguna de Apoyo at 5 PM and we loaded back onto the bus for the sixth and final time for the day to head back to our hostel, which has become so much like home to us. The ride back was filled with plenty of laughter, singing, and dancing, bringing us all even closer as a family. In order to save time, our nightly meeting was held on the bus instead of at the hostel. It was hard to hear and stand still, but I survived and was able to pass the torch onto the next leader of the day. After one pit stop for a restroom break and another 20 minutes on the bus, we were back at the hostel, most of us exhausted from the day’s activities. Upon arriving, we had dinner and then headed upstairs to separate our money with our GG leader, Robert, for our upcoming Community Action Project (CAP). 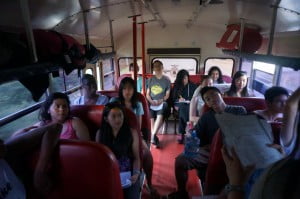 Our first and last nightly meeting on the bus

With that, we end night #13 in Matagalpa. Buenos noches my fellow Californians!