Hello family and friends! It’s August and Ali!! Today was Immigration Day. We started the day with a 50 minute field trip to a developing community named Batey Palave. We were fortunate enough to meet with the organizations Imagine and UJEDO which worked to aid local development mainly populated by Haitian immigrants or people descended from immigrants. We had a discussion with one of the foundation heads and then were given a tour of the community. There we were presented with a very delicious traditional Haitian meal and had lunch with the locals and people involved in the organization.

Walking around the community presented a lot of surprises to the group and was an emotionally heavy experience. Various sights such as the trash strewn across the streets, the people not receiving medical attention, and sick animals left a large impact on the Glimpsers. Personally, it was a sad sight to see that these people lacked the basic necessities to survive. We met with the uncle of one of the organization members who lived in the community. He told us of his struggles living there without healthcare, financial needs, and then basic parts of a home like bathrooms or enough beds to sleep in.  After viewing the community we had lunch with the organization members. After lunch we played games with the youth in the organization’s lodge. We played a game called “Common Ground” in which we shared very intimate details about our lives and experiences. We were very proud of our peers, the majority of who opened up and shared details about themselves that put them in a vulnerable situation, not only in front of their peers but strangers from a foreign country. It was an eye opening experience that removed any barriers between us based off of culture, race, or even language. It allowed us to come together on a more basic and human level and see each other for the individuals that we are. 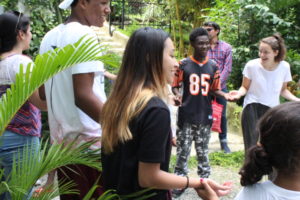 Personally, I (August) was proud of myself for opening up and conversing with people I am not close to. I tend to be a more quiet person and have trouble having conversations with people I do not know. Though it took me flying to a foreign country, I was able to open up and converse with people (in Spanish) without any restraints or restrictions.  For me (Ali), I was incredibly inspired by one of the youth from UJEDO named Wilken. He shared with us his experience growing up in Haiti and in the Dominican Republic. He was born in the DR but when he was seven his parents sent him to Haiti with his grandfather in order to learn about his culture and native language, Creole. Wilken is one of the many people in Palave that have experienced struggles with dual identity. Many first generation immigrants all over the world feel pressured to identify with one identity over the other. He fought against this pressure and considers himself a Dominican and a Haitian, due to his decision he faces extreme amounts of discrimination. Wilken inspired me to accept my dual identity as a Mexican American and I can’t thank him enough for sharing his experience with us. We both chose Immigration Day to be the leaders of the days because it was a concept that was intriguing. Being the leaders came with both challenges and perks. It took a lot of personal reflection and the willingness to step up as an example in moments like the game where we had to share personal experiences. Making sure everyone was safe and together was a daunting task, but with our role call (we will, we will, rock you!), we were able to complete the task. We also had the pleasure of thanking the organization’s leaders for accepting and welcoming us into the community.  After saying our goodbyes in Palave, we traveled to the Dios Dira Elementary School in order to teach our third English lesson. There we met with our Global Glimpse Youth Ambassadors, our lessons went well and we were able to plan for our fourth and final class. We finally finished the day by coming back to Conamuca and had an amazing dinner provided by our Conamuca Staff.  Overall it was an incredible and inspiring day for us all. It was very different to everything else we have experienced on this trip. August and I are incredibly grateful to have been able to be today’s leaders of the day. Thank you so much for checking in and we can’t wait to see you soon! Love,  August and Ali