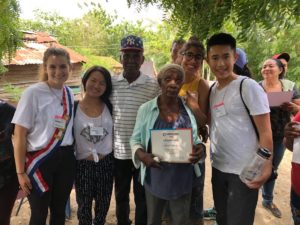 Hey everyone back home!!

This is Vidusha and Tess, we were the first student leaders of the delegation. Today was a really incredible and eye opening day… even though we had to wake up at 6am. The goal today was to live like a local from the town of Suarez. This meant that for 24 hours we had to live without electricity, water, or a fan, which was very difficult given the 90+ degree heat!

We started off our day with a simple breakfast of hot chocolate and bread at Rosaura’s. We then took a guagua (a smaller bus taken by many locals) to Suarez. Upon arrival, we met with family leaders from the town and went with them to meet their own families. Each family had its own unique characteristics, and we were able to ask them about their daily life.

Vidusha: My group was adopted by a single mother who had two children, a ten year old daughter, and a 17 year old son. Previous to meeting her I had heard so much from my GG leaders about how well respected she is by the community because she had worked so hard to raise her children by herself with no help which was very different to the other multiple adult households in the community. Meeting her, I was nervous at first because I do not speak any Spanish but I was quickly at ease because my two friends Shirley and Cindy helped translate and I was able to understand so much about her life and how she lived. I also had an amazing time watching her cook beans that she shucked herself and playing with her daughter.

Tess: My group met with an elderly couple who have lived in Suarez for their whole lives. I was expecting them to be very quiet and just want us to do chores, but the man, Rafael, was very open to talking to us. While I had trouble understanding 100% of what Rafael was saying, I could tell he has a passion for learning about other cultures and the way we live in California.

Talking to Rafael was the best part of my Global Glimpse experience so far because he was so open minded and seemed genuinely interested in what we were saying. In America, older people are often set in their ways, but Rafael said he wants to keep learning for the rest of his life.

After we talked with our families, we had lunch with all the Gimpsers and the community members.

After lunch, we sadly had to say goodbye to our newfound friends and family and headed back to San Juan. We were able to get a little bit of well needed free time, then jumped into our CAP discovery meeting. We unanimously agreed that for our final project this year we would be building a concession stand that would enable the community to sell and store food during baseball games.

We then headed to Rosaura’s for a simple dinner(in the dark) of yucca, fried egg, eggplant, and avocado. Finally,we walked to the accommodation and did our reflection, nightly meeting and thankfully got our fans and electricity back, though we were grateful for the experience.

We miss you all so much!