Yesterday was the second and final day of our CAP project where we painted the walls of the children’s home. As leaders of the day, it was our job to wake everyone  up, so we decided that the best tactic was to serenade them with “It’s Friday, Friday, gotta get down on Friday.” At 7 o’clock on the dot, very loud firecrackers were being shot up into the sky, which made our job easier when it came time to wake everyone up. As per usual, we went to Quiero Mas for breakfast where we had bananas, watermelon, and ham and cheese sandwiches. Immediately after breakfast, we walked up to the corner of the street and waited for a bus, and when we say bus “ride,” we literally mean ride because you have to hold on for dear life. The trip to the children’s home is an adventure in itself  because the public bus simulates a roller coaster. Don’t fret, parents–everyone survived. 🙂 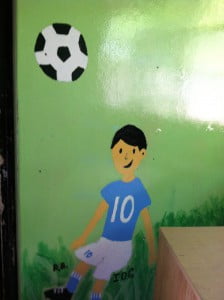 Boys’ room! They love their futbol 🙂 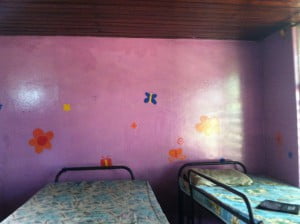 Girls’ room! Beautiful flowers and butterflies…and a fairy that will not be pictured. 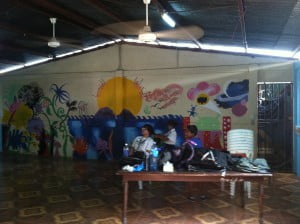 Once we arrived at the children’s home/orphanage, we continued to paint and add the flowers in the girls’ room. Everyone pitched in and got to show off their artistic abilities. The boys’ room focused on a soccer scene. The dining room crew did wonders by finishing their surreal and vibrant mural. As a finishing touch, all of the Glimpsers left a trail of handprints on the center border. 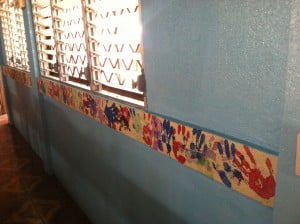 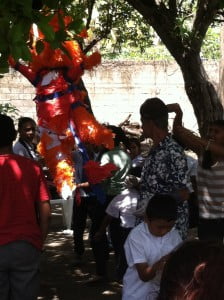 Hadi taking his chance at the pinata

We set the paint brushes down for a brief lunch break where we watched the children have a party and go crazy playing some rounds of musical chairs and attacking a pinata. Even Hadi took a swing at the pinata, which was entertaining for all of us. For lunch, we had rice, chicken, vegetables, a tortilla, and lemonade in a bag–it’s very common in Nicaragua to drink out of a plastic bag. Some of the Glimpsers gave their extra food to the starving dogs at the children’s home. As we returned to our work and the time went by, the walls came to life. They had really brought a vibrancy and life to the rooms and smiles to those few kids who stole a peek.

The actual painting process was a lot of hard work, not only because the walls were so big, but also due to the heat that we experienced in the small rooms. It was well worth the exhaustion because when Madre Maria Cristo guided the kids into the dining room to reveal the mural, their faces lit up. All of them had surprised looks on their faces, and some were even saying “oooooh” and “aaaaaah.” Renu donated school supplies like pens, pencils, and paper to the kids. Heather also donated an art book that she created herself. Madre Maria was so grateful and thankful to us for working so hard and having the passion to create such a beautiful mural. We hope that the paintings bring light and joy to the children’s lives and that it encourages their creativity. 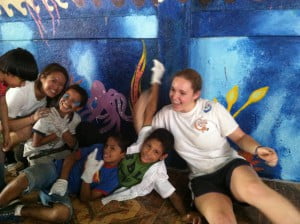 Glimpsers and the kids enjoying the finished mural 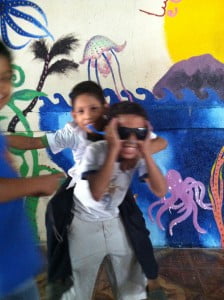 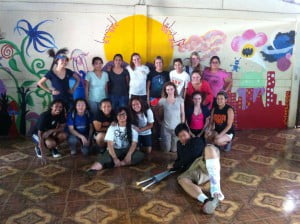 Our CAP is officially delivered!

Today was also our  last day of English tutoring, so we ended with a bang with a traditional talent show. This gave the Glimpsers and students a chance to broadcast their talents. As a group, we sang “What Makes You Beautiful” by One Direction and “Let It Go” from Frozen. Some students recited poems and sang as well. Many of the students gave gifts like keychains and food to their teachers. It was a very touching experience because you could see how grateful the students were for helping them. 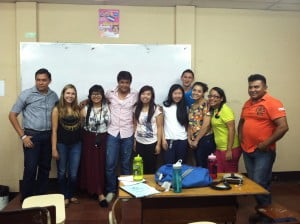 Being the leader of the day, although may seem like all fun and games, is quite stressful and a lot of responsibility. It was a rewarding experience despite all of the worries and frustrations that are associated with being a leader.

Looking behind and ahead,