This morning we had our last breakfast with Don Carlos, the same delicious pastries, hard boiled eggs and watermelon juice (amazing as usual by the way). A lot of people took pictures with Don Carlos and said nice things, because even though we would be back for lunch, he wouldn’t be there. 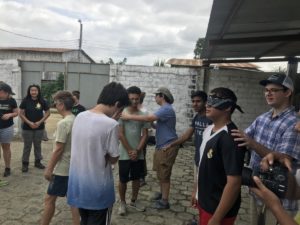 We then headed off to CDI, a child development centre, to paint murals. We started with some warm up ice breakers with the eco-club kids, a super fun trust and communication building one where some people had to walk around blindly and other people directed them. It was a little crazy and a lot of fun. We planted some plants and ended up playing a variation of volleyball with a plastic bottle, and then we started painting.

Outside, some people (a mix of eco club and us) painted ocean and nature inspired murals, including a wall of flowers and a surprised octopus. Inside, a little girl reading a book was painted in one room, and in another a bunch of animals including a monkey hanging from a mangrove (kind of) tree. It was super cool to do one last day of work with the eco-club kids, with a little less sweat and a little more creativity. 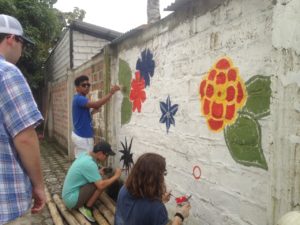 Lots of creativity and skill within El Groupo

We stopped at Don Carlos’s for lunch, and he had a surprise for us. It turned out to be veggie burgers and plantain fries, a nice reminder of home with a little bit of Ecuadorian and sustainable meatlessness mixed it. It was a very sweet surprise and a nice way to end our many meals with him. 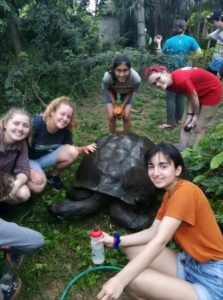 Saying hi to out homeboy Miguelito

We then drove to Saiananda to meet an old friend. His name is Miguelito who is 136 years old. He is a tortoise. He was adopted by some rich German people and brought from the Galapagos, but when WWII hit,  he was supposed to be sent back to the Galapagos but the boat sank. He was thought to be dead, because tortoises can’t swim, but nine years later was found on a nearby island and was brought back to Bahia. He spent some time in local high school, and now lives in retirement at Saiananda. We watered him and touched his shell and were all very impressed. There was also a sloth named don Perez(Oso) on the property that some people saw. We took some time to go down onto the deck by the river where David led a recap of the trip/meditation while we closed our eyes. Afterwords we got to enjoy the view and watch all of the birds flying over the mangrove islands which made it a very special moment.

We left Saiananda by bus and headed over to beach at Briceños to camp. Our first task was to set up the tents that we would be sleeping in, which required a lot of teamwork. One group of girls finished really fast and offered their help to one of the boys tents who seemed to be struggling, BUT THEY DIDN’T WANT IT. Don’t worry, they were able to eventually figure it out. Once the tents were finished, we all got to go swimming and body surfing during our last Bahia Sunset. Even though we have seen so many sunsets, it was still as special. We then attempted to have 9 girls shower in 20 minutes (it didn’t work). The boys were more efficient though and they all got to shower. We all sat together and enjoyed a dinner of rice, beans and fish and the table was filled with laughter and meaningful conversations.

After dinner, us leaders, led the nightly discussion where we shared memories and took some time to be critical about the actual impact that we had on the community while we were here. We all could agree that the physical work that we did mattered, but we all realised that the most important part was the connections that we made with the eco-club students and the happiness that we shared together. We then went down to the beach to check out the bioluminescence in the sand and started a campfire. After 10 kids and at least 30 matches, our amazing trip leader Kenneth came in to save us and was able to start the fire with just one match! Once the fire was started, we held hands in a circle, closed our eyes and passed a tight squeeze from one hand to another and felt the connection between us all. We finished the night with a meaningful shoulder tapping activity where we were able to share the impact that everyone had on us, but afterwords we had the chance to say it face to face – many hugs were shared and some tears were shed. People stayed up talking to each other and sharing experiences, not wanting to go to bed, trying to make the last night last as long as possible.