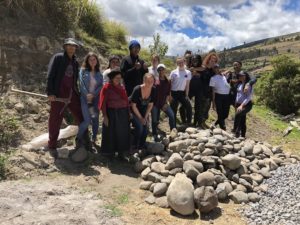 “Imanallya” from today’s leaders (“hello”in Kichwa, the language of the indigenous people in our region) Perla and Andrew. Today we had an early wake up call. As leaders we woke up earlier than usual, Andrew woke up at 5:00 and I (Perla) woke up at 5:30. At 6:30 we got on the bus and traveled one hour to another community named Guamote, to have a special breakfast with locals from that community rather than having breakfast in the hotel as usual. For breakfast we had one of their traditional meals which included fresh cheese, freshly made rolls, ceviche, chocho beans and homemade honey! We then learned about their community, one big take away was the communal connectedness. Everyone in that community including young girls and boys from the ages of 4 helped in the manual day to day work. Some of these activities include cooking in the kitchen, moving firewood up hills without modern technology, moving rocks up and down so that they could build a pool for the kids in the community to have fun once they have finished working after a long day.

The 28 Glimpsers were split into three groups in order to help with the community’s manuals work. One group 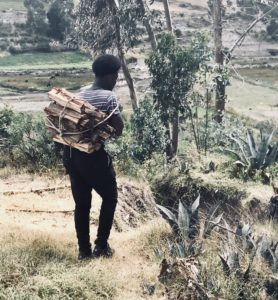 helped Gloria (a prominent member of the community’s daughter in law) bring enough wood for 3 years up a very steep hill which had her house located at the top. It was a new experience for us the Glimpsers because we saw at first hand how hard they have to work to meet their daily demands. During our experience we realized that carrying wood was not as easy as it seems due to such a high altitude that we are not used to as well as a steep and slippery climb. Another obstacle that we faced was getting splinters in our hands and the enormous and heavy logs we had to carry. Another group task was to carry rocks in order to make a community pool. They were also given a tour of the leaders land (Cesar) who showed them many vegetables, guinea pigs, cows, dogs, and donkeys. He also picked carrots for them and let them taste how an organic carrot without any taste of chemicals or processing truly tasted. A member of the group compared this to the farming process that we use in the United States. The third and final group was assigned to carry rocks a which will be used to build a pig enclosure. We all came to an agreement that it was all hard work that we weren’t expecting. 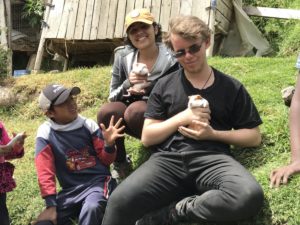 The final activity with the locals was having and preparing local lunch. For lunch we enjoyed some chicken that they had raised on the farm, soup, a mixture of vegetables that the community had harvested themselves, tomato salad last and homemade pineapple juice which was delicious. After having lunch and sharing our new experiences we thanked the hosts for letting us experience their daily life and showing us that there is more to education than just the theoretical knowledge. We then headed off to our busses and traveled one hour back to the hotel. After a day’s hard work we got a 30 minute break. Some people slept and showered during this time. This was followed by an hour and a half session of writing appreciation letters to the Global Glimpse donors. We then had another quick break, and went to an early dinner and nightly meeting as everyone was exhausted from the day’s work.

After today’s experience we realized how hard others have to work in order to get life’s basic necessities in ways we never thought of! With a close of today’s activities we ended the nightly meeting with a unity clap of “Sticks and stones”. 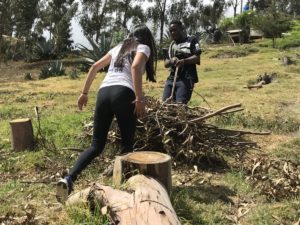