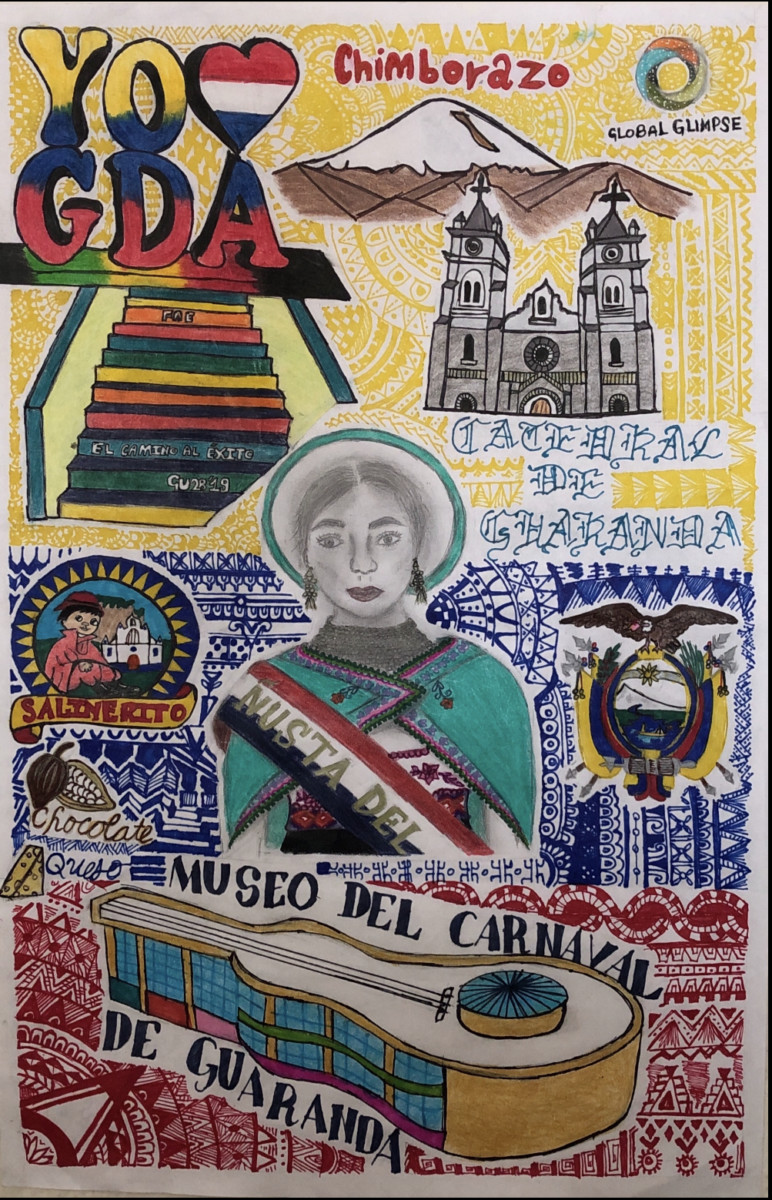 This artwork reveals aspects of what I learned about Guaranda, Ecuador, the people and the connections I made. On the top left hand corner, it says “Yo ♡ GDA ” which means I love Guaranda. This was a sign in the town square where we took pictures with our Global Glimpse leader. Right under it black, red, yellow, and green colors are represented. These colors represent a bracelet I received from one of my fellow glimpser as a symbol of how close we got in two weeks.

Under, “Yo ♡ GDA ” there are stairs of one of two CAPs (community action projects) that we did at FAE, a school in the rural part of the Bolivia Province. On one of the steps is written “El Camino al éxito” (The road to success). The purpose of this project was to beautify the school. “El Camino al éxito” is a statement saying that despite the great odds that are stacked against the students in FAE, if they take one step at a time eventually they will succeed. The steps to success are hard but once they reach the top they will have conquered and are stronger for pushing through adversity.

On the top right, Mt.Chimborazo is illustrated. The mountain will forever be the place that I made history by being the second person to faint in 25 years. It is a symbol of how hilly Guaranda is. At the top of the hill you get to see the beautiful green landscape.

Below Mt. Chimborazo is the Cathedral de Guaranda. The cathedral shows how religion is rooted in Guaranda and in its people. Many shops are closed on Sundays so that families can have time to worship God, and rest. Personally the cathedral is a symbol of globalization. Being a person of African descent I easily see the effects of globalization. Witnessing this in Guaranda reminded me of this quote by former president of Kenya Jomo Kenyatta.            “When the Missionaries arrived, the Africans had the land and the Missionaries had the Bible. They taught us how to pray with our eyes closed. When we opened them, they had the land and we had the Bible.” The quote above explains how the British, Spaniards, and French conquered the world and colonized it. The natives of this newly conquered land were blinded by the conqueror’s misleading gestures. By the time the natives realized what was happening the conquerors had taken over their land and all that was left was the Bible. This Bible was now the new sign of hope to help them through the hard times inflicted upon them.

Depicted at the bottom is “Museo Del Carnaval De Guaranda ” which holds all the history of Guaranda. The exhibits showcase the annual festival that Guaranda has. There are three main important figures in the festival. “Ñusta del Guaranda Pawkar Raymi” (Festival Queen/ Mother Earth), who is the indigenous girl in the middle of my artwork. Reina de Guaranda (Queen of Guaranda) a mestizo, and the most important figure Taita Carnaval (Carnival Father) who is a respected man among Guarandeños. All these figures are paraded up and down the street of Guaranda. They represent a mix of Spanish and indigenous culture.

To the left of “Ñusta del Guaranda” there is Salinerito, a local business located in Salinas where we bought chocolate and cheese. Salinerito is a community based company with its efforts 100% focused on building up the community. Salinerito values local companies because it will help the people in the community. For example they said that some of the money they get is used to help the elderly in nursing homes. The city of Salinas has a beautiful landscape in addition to salt mines.

The patterns in the background of the art work tell my story. The patterns express the pain of having to leave family behind in Africa and starting afresh in a new continent. The repetition of the patterns symbolize how I am constantly trying to reconnect with my culture, while struggling to uphold my bicultural identity. But, as I draw the same designs over and over again I become wary of the repetition of the same pattern. Hence, I begin another pattern. I then have to start over at a different section on the paper with different patterns. The designs are a symbol of trial and error. A symbol of new beginnings.