We started out our morning with a bus ride full of games, riddles and Spanish rap battles until we arrived in Bahia, just in time for lunch. Don Carlos, our chef and part of the Bahia family, made us a traditional peanut-based fish stew called Cazuela accompanied with plantains and arroz. He even showed us the traditional presentation in handmade clay bowls (check out the photo). 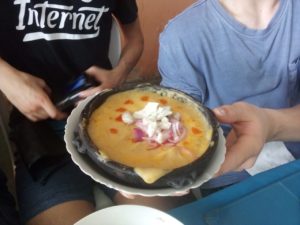 Cazuela in a traditional Clay Bowl

After lunch, we went over the ground rules and together drafted our own group’s guidelines and expectations. We made it entertaining with a game of charades where we acted out Bahia tips. The grand finale was a Bulgarian dance performed by Martin, Marcus, Harnoor and David. After the workshop, we headed to the park with some Eco-Club students for some name games involving acting out our favorite animals (along with some interesting noises). We then played a game of chi-boing – a game where the goal is to make the other people playing laugh. After the games and a nice hug for the magic Ceiba tree, we encountered the elusive Charra and enjoyed his hand-made coconut ice cream. We wrapped up the afternoon with a city tour of Bahia where we learned a bit about the history of the city, which ended at the beach with a beautiful sunset. 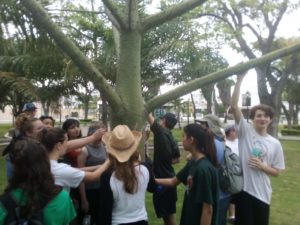 Giving the Ceiba tree (that has photosynthesising bark) a hug 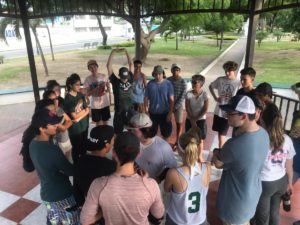 After dinner, we headed back to the hostel where we had our first discussion, sharing with each other about how our first day went, and had a quick yoga session before heading to bed.

We are all looking forward to a wonderful week of getting to know one another and the Eco-Club students, filled with laughter and life-long memories. The rest of the week you will be hearing from all of the students in their own blog posts. Feel free to comment – we will share them at breakfast each day!

Much love a todos from Bahia, 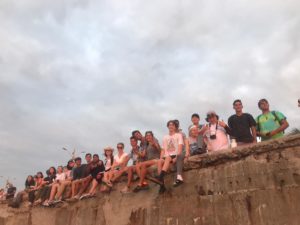 El Groupo enjoying the sunset down by the waterfront