Today was an action-packed day. First, we woke everyone up at 7:30 AM. Then at 8:00 , we went to Comedor Deja Vu. There we had an omelette, tortilla, and rice. Right after breakfast, we split into two groups to buy supplies for our Community Action Project (CAP). One group went to the hardware store to pick up gloves, paint, trays, brushes, rollers, and cardboard that was used as a tarp. The second group went to the biggest market in Leon, La Estacion, to pick up bowls for paint and bags for rocks. We also ended up picking up some snacks and actually cleared out one women of her cremas (a very delicious oreo type of cookie) inventory. Once everyone’s materials were bought and collected, we all met back up at the hostal and had lunch. Then went to La Goyena to begin our CAP.

Rebecca’s Perspective: As you may have known, our CAP was split into two projects, a mural to prevent domestic violence, and removing the rocks from a collapsed school building. Jessie and I both worked on removing the rocks from the collapsed building. In the begining I wasn’t really excited about carrying and removing rocks because, let’s face it, removing rocks doesn’t sound fun at all. But after I started actually moving the rocks, I tried being optimistic about it and thought of it like a workout. I tried my best to carry as many rocks as possible and claer the area of rubble. Sometimes when the rocks were too big, I would ask Rain for help and together, we would carry the rocks away. I think it was really great when some kids from the community would come over and help us clear the area of rocks. It felt really nice when they came over to help because it shows me that they actually care and want to help us. It made me feel that what we were doing was actually something they would appreciate. At one point Jessie lifted a rock and underneath was an ant hill. In order to prevent the ants from infesting the other rocks as well, someone had to quickly carry it over to the pile of trash. Surprisingly something possesed me and I got the courage to pick up the rock and run it over to the trash. Albeit I wasn’t very excited about clearing the rocks in the begining, now I can’t wait until tomorrow! 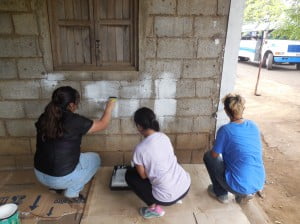 Working together to paint on the background for the mural.

Jessie’s Perspective: So as it was already said by Rebecca, we were both in the same group for removing rocks and rubble. There weren’t a lot of  big rocks but so many small rocks. We only had about two hours to do as much as we could, but it’s okay because we have four more hours tomorrow to finish removing rocks and rubble. It was a lot of work; everyone was sweaty and there were so many bugs around us, but we all pulled through and tried our best to help out the La Goyena community. About 15 minutes into removing rocks, the children from the community just got out of school and came to help move the rocks. It was so sweet to see them so eager to help us out. Some of us even gave the children one of our gloves so that they wouldn’t get bit or anything. They helped out for about an hour and then most of them left to play soccer. Two women from the community stayed to help the entire time though. It was really nice and they were surprisingly strong! They even gave us a smart idea to cut open our bags so we could carry the rocks easier. Once it was time to leave, we met back up with the people who were supposed to be working on the mural. I asked Eli how working on the mural went and she told me there were some things they did not expect, like the wall having windows or having cracks on it. It turns out we had bought just enough white paint to use as a base coat so Elisa had to go buy more when we left for tomorrow. Hopefully tomorrow will be a day where we won’t run out of paint or any other supplies (which shouldn’t happen in the first place) and that none of us get hurt carrying rocks! (:

Locals and Glimpsers working together to carry the rocks away. 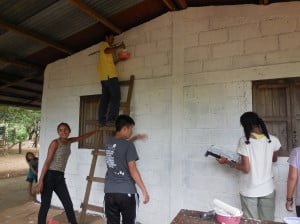 Finishing up painting on the background for the mural.